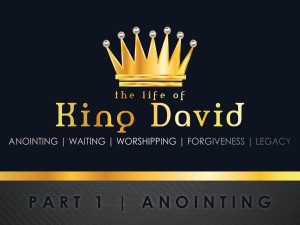 The world is full of many rags to riches stories. We love these stories, we make movies about the characters, and we teach our children to look at them as role models.

But the truth is that we only recognize greatness once it has been achieved in man’s eyes. The process, the humble beginnings, the hard work and the pathway of insignificance is mostly ignored by the world.

In the same way a person that God is forming for his purposes is often ignored and sometimes even ridiculed for their humble position and low standing in society. But God knows and God is working in all of us if we would just let him, to become someone that can be greatly used by Him.

This week we are starting a five part series on David, the warrior king of Israel, who was used by God to firmly establish and expand the nation. David was also the only person in the Bible who had the title; “a man after God’s own heart” as we see in Acts 13:22.

David came from humble beginnings, yet God saw him and called him to serve as King. In this narrative we have three main characters.

Saul was the king that God had given to Israel, but after Saul’s disobedience God rejected him (1 Samuel 15). Samuel is the great prophet of God and was more than simply a seer, he was regarded as a judge, highly respected and highly feared as well. And then we have David, his father Jesse was a man who lived in Bethlehem. Jesse had eight sons and David was his youngest son.

These events took place in 1024 BC, David himself was somewhere between 20 and 25 years old. The first time we see David in the story, he is described in a remarkable way (v 12). But he was the baby of the family and didn’t have much respect with his older brothers.

When Samuel went to Bethlehem, the leaders of the town trembled when they met him. They wondered if he was coming in judgment. I am sure that all the town of Bethlehem knew that the great prophet was in town and that he had chosen to invite Jesse and his sons to the sacrifice. Something was up! The seven older sons of Jesse were probably eager to be in the spotlight. Samuel told them to consecrate themselves in preparation for the sacrifice. This was a ritual washing and probably putting on clean clothes. I can imagine them dressing in their Sabbath best trying to impress the great leader coming to town. But where is David the youngest son? He is still tending the sheep, he knew about the sacrifice, but he faithfully kept on doing what was required of him. This is key, David didn’t try to arrange to be in the presence of Samuel. He didn’t ask someone to do his chores for him, he didn’t try to promote himself.

After all the brothers are rejected, finally as a last resort, David is thought of. Oh, yeah… there is one more son.

As they call David in he is probably covered in dust and smells of sweat and dirty sheep. Notice that he is not consecrated, because in God’s eyes he is already consecrated. He has a pure heart and God looks on the inside, where man looks on the outside.

It must have been a surprise for his father and brothers. It is unlikely that Jesse, or anyone else in the family, including David completely understood what had just happened. But the Lord was preparing David to be the leader of the nation. From a humble shepherd boy to a mighty warrior king.

David was already a man of integrity and courage, but now God added the power of His Spirit on him. David began to shine and he began to be noticed. Notice how Saul’s attendant recommends David in glowing terms in verse 18. David’s recognition quickly gets him favor and promotion in the service of King Saul. He rises to be one of the Kings Armor bearers.

Notice the progression here, from humble shepherd, to being selected, to being anointed and empowered by God, this humble shepherd is recognized and finds favor in the Kings courts. David was rejected and put down by his brothers, yet he was chosen by God. God had planned for David to be the next King even before he had been born. He was destined for this. (See Psalm 139:16)

What is remarkable in this chapter is David’s humility, not once do we read that David stood up and called attention to himself. He did not promote himself, rather he was recognized by God and man.

What a contrast to the world we live in. Our world says; “be noticeable, promote yourself, market yourself, tell the world how good you are.” But David is silently confident, trusting in the Lord.

Too many people today try to push themselves into prominent places without first proving themselves at home in the small matters. Character that God uses is developed in the life of obscurity.

God was preparing David while he was faithfully doing his work as no one noticed. But isn’t it interesting that what we do when no one notices, becomes what everyone notices.

People notice the outward manifestation of our inward life.

Our time spent with the Lord each day prepares us for the plans that God has for us.

What is God preparing you for? As God is preparing you, remember that how you serve today is just as important as what you will be doing in the future.