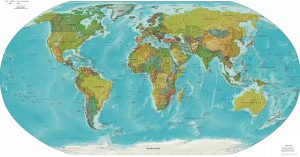 In Acts 17 we read about Paul speaking to the people of Athens in the Areopagus, while he was on his second missionary journey. Seeing their many idols, Paul addresses them regarding their idol named for the “Unknown God”, and he proceeds to tell them about the God who created all things and sustains all things, the one true God.

In verse 26 he says, “And he made from one man every nation of mankind to live on all the face of the earth, having determined allotted periods and the boundaries of their dwelling place”.

Paul made it clear to the Greeks that we are all descendants of one man. It is the lack of understanding of this fact that still creates untold pain and suffering in the world. God is the God of all people groups. The Greek word for nation that Paul uses is ethnos, that is people group and not national boundaries. In Genesis 1:27 we read that God created man and woman in His own image. That means that every human being is eternal and valuable because we are all created in the image of God. Every human being has an immortal soul in the image of God, everyone has a mind with unique reasoning abilities and everyone has the potential for a relationship with their creator God.

With that in mind, we must be so careful to avoid the sin of prejudice, we have no right to hate someone that Jesus died for, who was created uniquely in the image of God. Jesus came to the earth, he suffered and died to redeem people from every people group, and one day we will all sing together in his presence (see Revelation 5:9).

Then why is there so much hatred and strife in the world? The FBI recently announced that reported hate crimes in the United States increased by 17 percent in 2017. That marks the third consecutive year the number has gone up, and as you are well aware, it seems that our nation is becoming angrier and more divided every year. Hatred and racism is nothing new in the world, it has been around since the beginning of time. In 1 John 3:15 we read, “Everyone who hates his brother is a murderer, and you know that no murderer has eternal life abiding in him.” Which begs the question, who is my brother? In Luke 10, the expert of the law asked Jesus this question, and Jesus tells a parable about a good Samaritan, that was so provocative at the time it must have made the Jews cringe. We are supposed to love all people groups, even those who despise and hate us. Because of what Jesus has done on the cross for us, we have no right to hate anyone else.

In this regard, sadly we know all too well that the church has been guilty of some of the worst racism. Christians today should be more aware than ever before that if we allow hate to remain in our hearts, it will eventually find its way out. Where all of this becomes most critical for Christians today is when we come to hate a culture that increasingly appears to hate us. We are told daily in our news media and culture, exactly who we are supposed to hate, but this is not a Biblical worldview.

As our culture turns further and further away from a Biblical worldview, we will find it harder and harder to love the lost the way Our Heavenly Father does. Do you have a love for the lost? Do you love those who hate you? That is tough. In a recent article, Anne Lamott wrote, “You can safely assume you’ve created God in your own image when it turns out that God hates all the same people you do.”

Hate is a real part of being human beings, but that does not make it less sinful, we hate because of sin in the world and because Satan has devised a way to divide humanity.

Here is a simple question to ask ourselves, “Does God hate the people you hate–or will you love the people he loves?” How you answer that question will go a long way toward determining your impact for the Kingdom of God and the culture today.

How do we see reconciliation in the nations? How is it possible for hatred to be overcome? It starts by realizing that as a human race, God has put a piece of His nature into all the various people groups, as we come together we see and experience more of the character of God.

At a recent conference I attended in Kosovo, Pastor Venco Nakov from Macedonia encouraged the attendees to pray for the nations on their borders. I was struck by this and wondered how often we as the American church pray for God to bless our neighbors? Pastor Venco said, “Blessing your neighbors doesn’t mean you don’t love your country, it means that you are more of a patriot than anyone else.” He went on to say that no one asks you where you would like to be born, rather God has chosen you and I to be born when and where He divinely appoints.

As Americans, God has chosen you and I to live in this land at this time, to be His representatives, to pray for peace, to bring reconciliation to point the way to Jesus by proclaiming the Gospel. May we be a people who are known for loving our neighbors irrespective of their race and national identity to the glory of God.