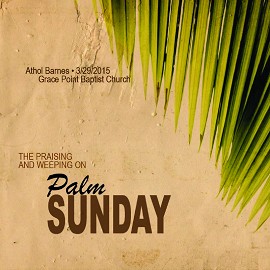 Today we celebrate what is commonly known as Palm Sunday, it is a wonderful part of scripture as our Lord is exalted and worshipped, we love this part of the Gospel account. Jesus even tells the Pharisees that if the people keep quiet then the very stones on the ground will cry out. Nature itself recognizes its creator. Up until this point in his 3 years of ministry Jesus had tried to keep his identity somewhat hidden.

Every spring, hundreds of Hollywood “stars” gather for the Academy Awards. Very few “slip in the back door:” instead, they make an entrance. They walk down the long red carpet, smiling at the cameras and waving to the people in the, showing off their clothing, chatting with the reporters. Some will go to great, great lengths just to be noticed.

Contrast that with Jesus: to the man healed of leprosy in Matt. 8, He said: “See that you don’t tell anyone.” To the two blind men He healed in Matt. 9, He, “warned them sternly, ‘See that no one knows about this.’” And in Mark 1, a demon possessing man in Capernaum yelled out “I know who you are – the Holy One of God!”, to which Jesus replied “Be quiet!” Jesus often chose not to be in the limelight. In fact, most of Jesus ministry happened outside of the capital city of Jerusalem, away from the big pomp and ceremony of the Temple, in small towns and villages along the way. Until today. Until the event we know as “The Triumphal Entry,” the day we remember each year as Palm Sunday. This day all of that changes. Now, we see Jesus entering the city of Jerusalem being proclaimed as Messiah and King.

But I want to draw your attention today to verse 41; “As he approached Jerusalem and saw the city, he wept over it” Why did Jesus weep on such a joyous occasion? And what does this mean for us today?

We see in the preceding verses the fascinating account of how Jesus obtained a young colt to ride on, His disciples dutifully obeyed and went and got him this wild animal that had never been ridden before. It must have been strange for them, because we are not told anywhere else that Jesus ever rode a donkey. But riding into the city was a public declaration that Jesus was a king coming in peace – The Prince of Peace. Five hundred years earlier, the prophet Zechariah prophesied about this moment in history (Zech 9:9).

But then the mood shifts, something dramatic takes place. Jesus abruptly stops and begins to cry out loud.

The mood in the crowd changed the person they were praising and celebrating suddenly begins wailing. There must have been an awkward silence, but why was Jesus crying?

As Jesus looked at Jerusalem and he saw the eager faces of those around him, he was overcome by the awareness of their emptiness. They were empty because they had not heard the truth of his message; they did not understand the true purpose of his coming to earth. They had eyes, but they did not see, and ears but they did not hear.

As Jesus looked at Jerusalem, he wept because it had destroyed itself. Wherever Jesus looked he found a reason to weep.

And all this because the people did not recognize the time of Jesus’ coming. The tragedy of the national disaster could have been averted. But Jesus knew that judgment must come and that rejection of the Word of God, who is Jesus, ultimately leads to punishment. It grieved Jesus because of his great love for the lost, the people he came to save.

As Jesus looks out over us, does he see a people who acknowledge and receive the Messiah, the Christ, the Son of the living God? …. Or does he weep, because of the lost opportunities for a deeper relationship with him.

Jesus calls out to us today just the same was as he did over the city of Jerusalem; we read again in verse 42; ““If you, even you, had only known on this day what would bring you peace..” 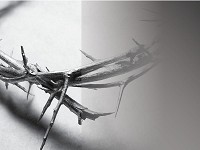 If Only! If only you would see and acknowledge the true risen Lord, and stop living a life of performance and religion. If only you would stop trying to be good enough for God, you cannot be good enough, you don’t have to be, Jesus Died so that you are forgiven and nothing you can do is good enough to earn the grace of God. If Jesus was to walk in here in the flesh, would he stop next to your chair and weep over you and say; “if only”.

You know, the last book in the Bible tells us that Jesus is coming back again, and this time he will be coming back as the warrior King on a white horse (Revelation 19), and on that day there will be no doubt who is Lord, every knee will bow before him and every tongue confess that he is God.

You don’t want to wait till that day before you acknowledge him as Lord of your life. Make the choice today, you may be a long time attendee and member here at Grace Point, but you know that you do not have the relationship with Jesus that he offers to you, something is missing, you are dry in your spirit. Make that decision today, Jesus is weeping for you.