One of the most prevalent struggles we face as Christians is Idolatry. Adrian Rogers said, “An idol is anything you love more, fear more, value more or serve more than you do Almighty God. Fill in the blank.”

We all have things we give worth to, we all worship something and if God does not have the priority in our lives, those things we value become idols.

The children of Israel during the time of the Judges thought they were still following God, although they had added some of the idols of the Canaanites to their lives. As a result, God punished the Israelites by using the Midianite invaders. The people cried out to God for help, and God called Gideon to be a judge, a great military leader, to save the people from the oppressive Midianites. God had called and revealed Himself to Gideon, but now it was time for Gideon to do what God called him to do.

God instructs Gideon to take a bull and tear down the altar of Baal and cut down the Asherah pole and use the wood of the Asherah to offer a sacrifice to the Lord. That night Gideon does what he is instructed by tearing down these false idols and offering the second bull to the Lord. It is remarkable to note that Gideon may only have been twenty years old at this time. But he starts at home and deals with the idols in his own home first.  This is such a vital lesson for us. In our lives today, we have idols, the gods of humanism that draw our attention away from God; comfort, entertainment, peace, wealth, sport, politics and many more, all of these are not bad in themselves, but when left unbridled, they quickly become idols that we need to tear down.

When God tells you to put away an idol, it won’t be easy but whatever God is calling you to do, be completely obedient just as Gideon was obedient.

Notice that Gideon did something that no one could see at the time, it was hidden in darkness, but it had clearly visible and spiritual consequences. This is where the battle is won, not on the battle field, but in the secret place as you spend time alone with God in prayer. Never discount the time spent alone with God as waiting and marking time, it is the most valuable use of your time. Don’t for one moment think that you can live a victorious Christian life without a healthy prayer life. Prayer is where the real church growth takes place, and the kingdom of God is advanced.

The people of the town of Ophrah quickly find out who destroyed the idols and they go to the house of Joash and demand that he hand his son over for execution. Joash reacts quickly and with wisdom, challenging the people to test Baal and see if he will defend himself? Joash was convicted of his own sin, provoked by the faith and obedience of his son. As you and I step out in faith, it will provoke faith in others, others will look at your steps in faith and it will rekindle in them a fresh love for the Lord.

Never underestimate the power of obedience to the calling of God to transform the lives of those around you.

At the same time, the Midianites and the Amalekites were invading the land once more (Judges 6:33). But then we read in verse 34 that the Spirit of God clothed Gideon. Gideon became a physical manifestation of the presence of God and when he blew that trumpet, everyone could see that he was different. Jacob Myers says, “The Spirit of the Lord became incarnate in Gideon, who then became the extension of the Lord.”

We must remember that this is pre-Pentecost, and during the Old Testament God chose to clothe men and women by His spirit for specific tasks. When the Holy Spirit was given to the church at Pentecost, we all, who have given our lives to the Lordship of Jesus have this same Holy Spirit power in us.

Gideon was prepared for battle, as he blew the trumpet the tribes came together in response. What an incredible miracle. Here was a young man who moments ago was hiding and fearing for his life, suddenly filled with power, calls the nation to war, and they respond!

It all seems to be happening so fast and in verse 36 it seems that Gideon begins to waiver in his faith. He asks God for a sign of confirmation of His call. Gideon tests God, and we need to ask ourselves how often do we test God ourselves? As we question whether or not God is leading us we stand frozen in place, asking God for another sign.

The two miracles of the fleece and the dew are powerful miracles in verses 36 to 40, God confirms his presence and call on the young warrior. Gideon is now ready, and the battle is about to begin.

As we look at these few verses, we see a progression:

What Idol is God calling you to destroy?

We make idols out of savings accounts, cars, careers, unhealthy relationships, anything that hinders you from moving forward and experiencing the very best that God has for you. As you trust completely in God for the future you will find that it is the very safest way to live your life. 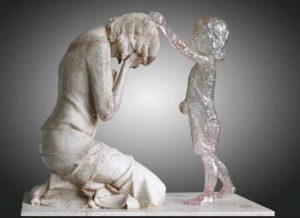 Yesterday, if you attended Grace Point, you would have heard from Denny and Mindy Thibault. The Thibault family have been called by God to be the voice for the voiceless in the cry to end abortion in our land. They are collecting signatures for a petition to present a million signatures to the Supreme Court. You can sign the petition here, https://themoraloutcry.com/

I encourage you to sign and do what you can to stand up for the weak and the most vulnerable in our society. Debbie and I are passionate about ending the injustice of abortion and we know that this is more than simply a political decision, this is a spiritual decision and Satan is determined to destroy as many lives as possible in the womb. I believe the reason is that Satan knows the power that children carry in the Kingdom of God, Psalm 8 vs 2 says,

“Out of the mouth of babies and infants,
you have established strength because of your foes,
to still the enemy and the avenger.”

As we closed the service we sang a song called, “Everything and Nothing less” written by Chris McClarney. As I was singing, I really began to think about the lyrics which go as follows,

And I began to think of my life, I quickly dismissed the challenge and thought that I have submitted my all to God, I have a list of credentials to say that I have offered my all to God. But very quickly God reminded me that I was a long way off from perfect submission to Him. I had to repent and realize that their were areas in my life that I still held on to, that I still wanted control over.

Oswald Chambers always reminds us in his writing to live a life of abandonment, releasing all our talents to the Lord for His use. I read this little snippet from him this morning.

“Abandon to God is of more value than personal holiness.” Here’s why: “We have to get rid of this notion-‘Am I of any use?’ and make up our minds that we are not, and we may be near the truth. It is never a question of being of use, but of being of value to God Himself. When we are abandoned to God, He works through us all the time.”   Oswald Chambers

As I was repenting of my selfish idols, God was gracious to remind me that our life value does not consist of what we “do” for Christ, but that we are redeemed, loved and adopted into the Kingdom and family of our Heavenly Father.