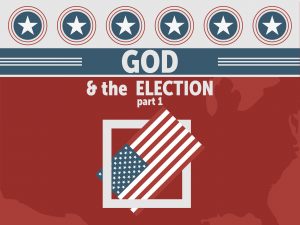 Welcome to post election 2016. There is much anxiety in America right now, we see it in our streets and in the media. As the church, how do we navigate these turbulent times? What it really boils down to is the question, where do we place our hope? Do we trust in our government, or do we trust in our God?

The Bible has a number of passages that guide us in our relationship with our earthly rulers. Paul writing in Romans 13 has much to say to us as Christians in 2016.

One of the more challenging verses in the Bible is Romans 13:1. Paul states that every authority has been established by God, and he repeats himself to ensure that the readers would not misunderstand the dramatic statement he was making. This article is too short to try to understand why God would allow rulers like Hitler, Stalin, Mao Tse Tung and so many other dictators. There is much we don’t and won’t understand this side of eternity. But God is either Lord of all or he is a victim of unexplained circumstances.

I don’t for one minute believe God is reacting to sinful man. God is not the author of evil, neither is he the victim of evil.  God is the creator and sustainer of all things, he knew from the beginning of time who would win the election this past week. God alone is in control and he is not fretting about election results.

Looking at Romans 13:2, any thinking person immediately struggles – are we to obey everything that the government tells us to do, even if it is immoral? These verses written by the apostle Paul are not intended to be an absolute rule demanding unconditional obedience to evil regimes in the world, rather it is a general exhortation for believers to be good citizens of the nation, paying taxes, following the law and playing our part in society. However, when the government requires citizens to go against the stated will and law of God in the Bible, then we are compelled to follow the law of God rather than the law of the government. There are many occasions in the Bible where God approves and even commands disobedience towards the rulers of the land. Look at Esther, Daniel, Peter and the Apostles directly defying the Sanhedrin in Acts 5 by continuing to preach the Gospel as but a few examples.

As we read further in the chapter, it seems that Paul shifts focus entirely and begins to write about loving our neighbor. Paul is going back to the law of God, he started the chapter by writing about the laws of the land, now he is looking at the higher law, the law of God. If this portion sounds similar it is very similar to what Jesus said in Matthew 22:37-40. Paul confirms this and he ends verse 10 by saying; “Therefore Love is the fulfillment of the law”.

Paul continues in verse 11 by saying; “and do this…” do what? Obey the law of the land, and obey the law of God. Being model citizens of both the land and the Kingdom of God. Why?

Here is the most important verse of the chapter, verse 11 states; “And do this, understanding the present time: The hour has already come for you to wake up from your slumber, because our salvation is nearer now than when we first believed.”

Understanding the present time, the times we are living in are truly incredible, history is culminating towards the return of Jesus. What Paul says to the Roman church he says to us, “wake up”, wake up and focus on eternal things. If we have been living in sin, it is time to wholeheartedly live for Jesus Christ and his kingdom. If we have been compromising with the world, we cannot afford to do that anymore. Now is the time to wake up!

You may have been completely isolated and had your head in the sand, but the world around us is scared. There is uncertainty all around, we as followers of Jesus, do not need to live in fear and uncertainty.

As the Church we need to take very seriously the task of praying for our nation. In fact, if we really took seriously God’s word and we really cared for our nation and the world at this time, our prayer meetings will be the most well attended meetings in the church. The church doors would be open all the time as people would be gathering together to pray and ask God for mercy and healing for our land.

The well-known verse 2 Chronicles 7:14, recounts a pivotal time in the history of Israel. As we apply this verse to ourselves, we too are in a pivotal time. Notice that God does not say that if the nation humbles themselves and prays, rather he says “if my people”. We as followers of Jesus Christ need to start the process by humbling ourselves and by repenting of our wicked ways. Paul called on the Roman church to repent in verse 13, calling on the church to commit themselves to holiness and purity. We as followers of Jesus Christ need to set the standard in our own lives.

Do you have dual citizenship? Are you a citizen of the land and a citizen of heaven? You may say yes, but you are living in fear and uncertainty. As a citizen of heaven, a citizen under Jesus Christ as the king of Kings, you need to repent of fear and begin to display the kingdom of God to those around you, being a light in your community. If we truly grasped the truth of the Word of God we should be the most hopeful and joyful people in the world.