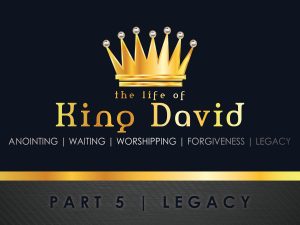 We as a nation are embroiled in one of the most energetic and passionate political seasons of our history. While the candidates position themselves to become the next resident of the White House, the current President is focused on something else, his legacy. How will history remember President Obama?

We have all been the beneficiaries of a legacy that was handed down to us. For some of us that was a wonderful memory or character instilled by loving parents. But for others that legacy is one of pain and hurt that causes one to walk through life with a limp.

David is older now, his kingdom is well established and he calls all the leaders together. He wants to address the leaders, those who will get the job done those to whom he can entrust his legacy.

David starts by talking about his desire to build the temple. With all that David had accomplished in his life, there was one yearning desire that was unfulfilled, he wanted to build a temple for God in Jerusalem. It was David’s dream, but God said no. This is not a job for a man of war but a man of peace.

The motivational speakers of our day will tell us that we can be whatever we want to be, we must dream big in order to achieve big goals. But sometimes we don’t achieve certain goals in our lifetime.

When we commit our lives to following Jesus, he gives us a new direction for our lives and the plans that he has for us are far higher than any dream we could have.

What dreams have you let go of in your life? Do you still feel the sting of regret?

Allow God to give you a bigger dream a better dream for your life and for those who will come after you.

David makes it clear that Solomon is the future King and that his son Solomon will be the one to fulfill his dream of building the temple.

Moving on to verse 8, we see David now charging the leaders of the nation, he is giving them a responsibility to carefully follow the Law in order to receive the blessing of God. David is challenging them to walk in purity.

But then in verse 9 David turns to Solomon and gives him a powerful word of encouragement. (See 1 Chronicles 28:8-9). This is far more than a word of encouragement. This is a charge, a commissioning a handing over of the responsibility of the nation. David had run as far as he could and now he was charging Solomon to continue on.

David urges Solomon to know God, not merely serving Him out of duty, but to really seek Him and know Him wholeheartedly with all his mind. David using language that the Israelites would have easily recognized as coming from the Law of Moses in Deuteronomy 6:5. David reminds Solomon to be devoted to God, because God knows every intention of the heart of man.

The sad reality is that this is a major problem today. People are being taught that it is your actions that count. Do good things, make sure you are doing enough good things, following the law and helping the downtrodden. While that is all good and we need to do these things, without a knowledge of God and true heart transformation, there is no salvation. God knows the intentions of your heart. Only a personal relationship with Jesus Christ and allowing the Holy Spirit to transform your heart leads to salvation.

Parents, we are often guilty of this, in our homes, we need to enforce rules and teach our children to obey. Pick up your clothes, take out the trash, empty the dishwasher! How often do we encourage them to know God, to seek Him, to Love him with all your heart. I find this deeply convicting as I was preparing this message. I want my children to know God and to serve Him that is the legacy I want to leave them.

Following this charge, David proceeds to give Solomon the blueprints and instructions for building the temple. From verse 11 to 18 are just some of the details that God gave to David. And then in verse 20 David picks up the Commissioning of Solomon (See 1 Chronicles 28:20). If these words sound familiar to you it is because these are almost exactly the same words that Moses said to Joshua as he was preparing to die (See Deuteronomy 31:6).

There are a number of parallels between Moses/ Joshua and David/ Solomon.

In each case both Moses and David received a covenant promise from God that shaped the future of the nation.

In each case Moses and David received a revelation from God that they passed down.

In each case the former did not see the fulfillment of their dreams.

Moses did not enter the Promised Land, but handed that over to Joshua, and David did not see the temple built but he gave that responsibility over to Solomon. And on both occasions we have that charge to be “strong and courageous”, which is echoed in Joshua 1:9 when God commissions Joshua.

David died and left a void that could never be filled, there was never another king like David. But David completed the task that the Lord had for him to do, and Solomon was a different leader that was required for a different era. David left a legacy, he built a foundation for a nation that Solomon could build on. As we have seen from the life of David, the most important value in his life was his worship and love for God.

Every one of us leaves a legacy.

No matter our age, we all have someone younger than us who is looking up to us. Who are you investing in?