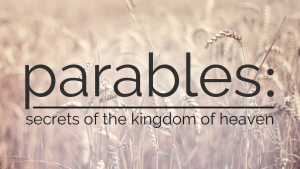 As we look at Matthew 13 we see that Jesus taught eight parables, and each time he said something to the effect of “the Kingdom of Heaven is like….”, and then told the parable. Some longer, like the parable of the sower, and some shorter like the leaven in the flour, which is only one sentence.

But we need to define the Kingdom. Matthew wrote to a predominantly Jewish audience, as a result, he used the term Kingdom of Heaven, whereas Luke and the other gospel writers used the Kingdom of God for the same principle meaning.

The Kingdom of God is the rulership of God over all things. He owns and sustains all things, but because of man’s sin, the world has been under the rulership of Satan. This is not to say that he rules the world completely; God is still sovereign. But it does mean that God, in His infinite wisdom, has allowed Satan to operate in this world within the boundaries God has set for him.

The earth is in subjection to the rule and influence of Satan until Jesus comes again and destroys his evil kingdom. Paul writing in Romans 8 describes how all creation has been groaning and eagerly waiting for the new kingdom to be revealed. When Jesus began his public ministry, he began the introduction of the Kingdom of God to a lost and dying world. The Kingdom of God is not strictly a future hope tied in with Christ’s second coming. it is the realm of God’s rule both present, and future. Jesus ushered in the Kingdom of God, of which He was the embodiment, when He commenced His earthly ministry (see Matthew 4:17).

When Jesus died on the cross and defeated Satan, he began the process of dismantling Satan’s kingdom and installing the Kingdom of heaven. So, the kingdom of heaven is present in the world, but not yet in it’s fullness.

The kingdom of Heaven is so foreign to the world’s kingdom, especially in our era, where the focus of our worship is ourselves. Jesus uses eight parables to introduce some of these foreign concepts of the Kingdom, four of which he tells the crowd, and then another four he tells privately to his disciples, he turns his attention to his inner circle, continuing to explain to them that this is what the Kingdom of heaven is like.

Focusing our attention on two of these parables; the man who finds a treasure hidden in a field and the merchant who finds a pearl great value, what can we learn from them?

When a person makes Jesus Christ Lord of their life, it must cause a dramatic change in one’s value system. The things we valued the most, we set aside;  the things that the world views as treasures become worthless in the knowledge of eternal life.

These two short parables speak volumes about what it means to be a follower of Jesus. What is valuable to you? Not just possessions, but people, titles, position and places. For some people their treasure is their sport, or their hobbies or their career (see  Matthew 6:21).

In both these parables, the man and the merchant sold everything they had to obtain a greater treasure. This is foolishness, this is extreme, this is radical. These are the same adjectives that people use when describing followers of Jesus.

RT Kendall wrote: “Once you have truly experienced the anointing of the Spirit, your money, reputation, love for the world, fear of what people will say and so on all pale into insignificance.”

The Bible does not say that having material possessions is wrong, rather it is when those things become more important to us than God, then we have a problem. This is because there is no comparison between the treasures of this world and the treasures of the kingdom of heaven.

The merchant who sold all that he had to buy one pearl, didn’t simply exchange one treasure for another. He found a treasure supremely more valuable than anything in his life.

This is what Jesus offers us and when we become part of the kingdom of God, we experience a treasure and a life that makes all other desires small in comparison.

So here is the big question, does this reflect your Christian experience?

Or have you simply tried to add a bit of religion to your life by raising your hand in a meeting in response to an altar call, but you really don’t know this treasure of the Kingdom?  Salvation is more than simply avoiding hell because our sins are forgiven. What you have available to you are treasures of inestimable value (see Romans 8:32).

When we ask Jesus to be the Lord of our lives, God gives us his Holy Spirit to fill us and to reign in us; we become a part of the Kingdom of Heaven. When we become a follower of Jesus, we become like the leaven that impacts the dough, we become a change agent in our community, preparing the way for the fulfillment of the Kingdom when Jesus comes again.

But there is a different way of looking at these parables that will hopefully transform your thinking. When Jesus was telling these parables, he was proclaiming the Gospel message. Jesus came to the earth, setting aside his heavenly throne and took on flesh, he became a man just like us as he set aside his golden crown to take a crown of thorns (see Philippians 2:7-11). When we see this, we see that Jesus is the person who found a treasure in a field, it is Jesus who found the pearl of great value and it is Jesus who gave up everything to obtain it. It is Jesus who bought the treasure of salvation by buying the whole field of creation. These parables reveal the Gospel, they reveal the glory of Jesus who denied himself even to the point of dying on the cross so that he would receive the name above every other name.

The kingdom of heaven operates on a completely different currency than our small world.  Have you discovered this kingdom? Give everything you have to the Lordship of Jesus and God will give you a life and a future of infinite value.