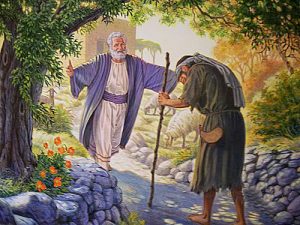 We all know of the original Star Wars trilogy released between 1977 and 1983. A trilogy is a set of stories, each with their own plot, but connected to a bigger plot when combined as a three-part story.

Jesus also told a trilogy of stories, in Luke 15 we read three well known parables that Jesus told. The three parables of Luke 15, the lost sheep, the lost coin and the prodigal son, were all told by Jesus in quick succession in response to the grumbling Pharisees (see Luke 15:2).

The Pharisees were grumbling because Jesus was receiving sinner, I am so glad that Jesus still receives sinners today! I pray that our church never shy’s away from fellowship with sinners, because we are all sinners saved by grace and have nothing that makes us better other than the grace of God and His gracious indwelling presence.

Jesus responds to them by telling three short parables, the first one is the parable of the lost sheep, where the shepherd leaves the 99 sheep to search for the one which was lost. Then Jesus tells the story of the woman who has lost a coin, she searches diligently until it is found. Jesus ends both these parables with the gentle rebuke to the Pharisees and the scribes in verses 7 and 10, “joy in heaven over one sinner who repents …”.

These sinners that the Pharisees viewed as worthless, were of immense value in the kingdom of heaven.

Then Jesus tells the story of the Prodigal son, or the lost son, seems more appropriate.

This son asks his father for his share of his inheritance, essentially telling his father that he wishes he was already dead. He takes the money and wastes it, he defiles himself and ends up reaching a point of desperation. It is at this point that he seems to come to his senses, the Bible says; “came to himself”. He turned and headed for home.

In our salvation experience, we all must come to the place of turning, realizing that we cannot do anything good on our own to earn our salvation. We must hit rock bottom and cry out to God to be saved by accepting the free gift of salvation and asking Jesus to be the Lord of our lives.

The prodigal son goes home and hopes just to be a slave, hoping to pay back what he wasted. He just wants to be around his father and the household, in his mind he has disqualified himself from sonship.

Then we see the overwhelming Gospel story in the prodigal son, as the brokenhearted father, who has missed his son so much, is waiting for him. The son begins his prepared speech, humbly asking for a position of servanthood, but the father doesn’t pay any attention to his plea and commands that he be given three things. These three items are vital in our understanding of the story.

The Best Robe: The robe symbolizes cleansing and forgiveness, a washing and putting on new clothes. When you become a Christian, you are washed with the blood of Jesus and then you are clothed in the righteousness of Christ.

The Ring: The ring was probably like a signet ring, which carried the seal of the family. The implications of this are huge. The son was reinstated with authority into the family. He has been brought back into his original position. When you become a Christian, you are adopted into God’s family with full authority of a son or daughter of the King. You are an ambassador, you have the authority to represent the king of kings.

The sandals: Sandals were given to represent the fact that the son was not a slave, he had freedom. Slaves were kept in subjection, without shoes, but true children were free to walk around.

The tragedy is that so many people come to Jesus and ask for the forgiveness of their sins and then assume that the Lord has recruited them to be his hired hands, rather than being a beloved child whose debt has been paid in full by the blood Jesus shed on the cross.

Is that you today? You are limping in with a dirty coat, when God shows you the ring, the robe and the sandals, you decline because you feel unworthy of such forgiveness and grace, and you would be right!

But God gives you and I that new robe of righteousness, the ring of adoption into the family, and the sandals of freedom. Stop living as a slave and begin living as a desired and treasured part of the Family of God (see 1 Peter 2:9).

As Jesus ends the parable of the lost son, he throws in the picture of the older son, the Pharisees must have really felt the slap in the face of that. It was obvious that Jesus was referring to them and to all self-righteous people in the church who don’t know who they are in Christ, living according to a set of rules, rather than living as a child of the king.

But why the three parables in answer to the grumbling of the Pharisees? Jesus never wasted words, he didn’t simply tell three stories to make the same point, combined the parables reveal a profound truth about our salvation.

In the parable of the lost coin, the woman lights a lamp, sweeps the house in search of it. The Holy Spirit is the light revealing the word to us and sweeping out the house of our souls to prepare the way for the transformation of God in our lives.

When we look at the parable of the lost son, we see the true focus of the story is on the Father who forgives and lavished love and blessings on the returning son. Tim Keller writes in his book “The Prodigal God”, where he shows God to be the prominent prodigal, because he loves us with reckless abandon, pouring out unmerited favor and blessing, holding nothing back.

We have three parables revealing distinct aspects of the working of the trinity in God’s plan of salvation.

The parable that consumes our attention is the Prodigal son, because we can so identify with either the young son or the older son. Neither son realized who they were in the family, and sometimes we are no different, we choose to live as orphans when our Heavenly Father has adopted us into His family.

We choose to live in spiritual poverty when we have been granted unmerited spiritual authority.

We have been clothed in righteousness and given the Holy Spirit to help us daily in our walk.

Do you really know what it means to be a Christian?