Here we have an account that only Luke records. At first glance, this seems like a strange passage of scripture, why would Luke record this detail of the travel plans that didn’t work out. 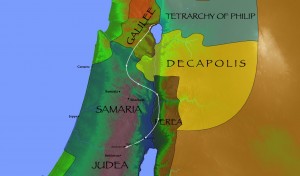 In 722 BC, the Assyrians invaded the northern Kingdom of which Samaria was the capital. The Assyrians left some of the Jews in the region but allowed other foreigners to inhabit the land. The end result was a mixed race, and many of them worshipped the foreign gods of the Assyrians. The Jews who lived in the region did not believe that you had to go to Jerusalem to worship God and set up their own temples. The rest of the Jewish nation regarded the Samaritans as ethnically and religiously impure, and there was a lot of prejudice and animosity between them.

So with that history in mind, we have the passionate James and John, the sons of Thunder as Jesus called them, being so offended by this Samaritan rejection that they want to call down fire and destroy the city.

In order to better understand their reaction, we need to look a few verses back in Luke 9, where the transfiguration of Jesus is recorded for us. Jesus takes Peter, James and John, up onto a mountain to pray, and suddenly Moses and Elijah appear and begin talking to Jesus.

James and John must have remembered their encounter with Elijah and the fact that Elijah had called down fire from heaven to destroy the two captains and their 50 as recorded in 2 Kings 1.

But the disciples were misguided. In their minds, they were marching into Jerusalem with the King of the Jews, who would establish a mighty kingdom, and yet these mindless Samaritans had the audacity to reject Jesus! Their attitude and request reflects their racism and their prejudice. What they had to learn, and what we also have to learn is that the journey Jesus was taking to Jerusalem was not to judge the world, but it was to save the lost.

They certainly displayed passion, but their passion was misguided. They were influenced by their culture and their prejudice. Jesus was using the situation to challenge their prejudice, to remind them that the Son of God, didn’t come for the Jews only, but for all peoples and that the real enemy is Satan, not the lost people who don’t think or act in a way that they were comfortable with.

As we encounter people who don’t have a personal relationship with Jesus, how do we respond to the drug addict, the adulterer, the alcoholic, the homosexual, the murderer, and the thief? (1 Corinthians 6:9-11).

Do we call down judgement on them? Do we confront them with the law and a superior attitude?

As Jesus rebuked his disciples, he rebukes us today. Jesus came to save the lost, not to call down fire on them. Ultimately Jesus will judge all mankind, but we are called to reach the lost as Jesus did, to preach the Gospel to the poor, to release the captives, to restore sight to the blind, to set the oppressed free (Luke 4:18).

From the perspective of the Samaritan village there is a legitimate reason why they rejected Jesus.

The Key phrase is found in verse 53; “…he was heading for Jerusalem.” It upset them that he still wanted to go to the temple in Jerusalem rather than to worship at their place of worship. But apart from that, along with Jesus came a large crowd of people. Most of them were probably social outcasts, the poor, and the unclean according to their laws. It was going to be noisy, messy and probably inconvenient. And therein lay the problem, for Jesus to come to town was inconvenient.

The truth is that when Jesus enters a person’s life it is never convenient. When Jesus comes into your life, he asks you to care for the widows and the orphans, to love the downtrodden and the poor. He calls you to give your time, your money and your energy in order to tell others the Good News.

Jesus coming to town is seldom convenient, but if you do not receive him, you miss out. This Samaritan town missed the opportunity of hosting the King of Kings, the creator of the universe.

What took place here was a serious cultural and social offence.

No wonder the disciples wanted to immediately call down fire and destroy the city. How dare they!!

Yet, we read how Jesus responded (Luke 9:55-56). Jesus is rejected, he doesn’t try to plead his case or convince them that they are going to miss out, he simply moves on.

Jesus wasn’t surprised by this rejection, he knew exactly what would happen. He sent his disciples ahead on purpose, knowing that they would be rejected. He was using this as a teaching moment for his disciples, preparing them for what was about to happen to them and setting an example for all believers to follow. When you are rejected for being a follower of Jesus, don’t fight for your rights, simply move on (see Luke 10:10-11).

In our post-modern culture of self-importance and pride, this is a tough lesson to learn. Fortunately we get many opportunities to learn this lesson!

But Jesus had his eyes fixed on a bigger goal (see Luke 9:51). Jesus is focused on the ascension. He is looking forward to going home. He knows where he is going and nothing is going to detract from that. Not the cross, not the grave, not even his rising from the dead, he is looking forward to the day when he ascends into heaven to sit next to His Father.

We also must have a heavenly focus, viewing every day in the light of eternity. Sadly we are so focused on trying to make this life as comfortable as possible, that we forget where we are going.