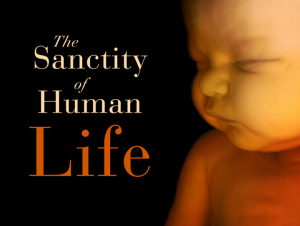 A few weeks ago many churches around the country remembered the Sanctity of Human Life Sunday. This tradition started On January 13, 1984 when President Ronald Reagan issued a proclamation designating January 22 as the first National Sanctity of Human Life Day. On this day we remember the tragedy that took place on January 22, 1973, when the U.S. Supreme Court legalized abortion-on-demand in all 50 states. Churches around the United States use the day to celebrate God’s gift of life, commemorate the many lives lost to abortion, and commit themselves to protecting human life at every stage. While the number of legal abortions per year has declined steadily over the last twenty years, there were still 977,000 legal abortions in the USA in 2014 according to the Guttmacher Institute (AGI)

In recent months the media has been exposing some of the horrendous practices of the abortion industry, and the selling of human body parts for profit. Although this is shocking and unthinkable to most people, it is the logical destination of the path that our nation is on once abortion was legalized. The good news out of this is that it has turned the spotlight on the horrors of abortion and the popular opinion is changing. The focus of the mainstream media has always been on the inconvenience that an unwanted pregnancy causes for the mother, whereas now we are seeing more and more people beginning to talk about the innocent lives that are being slaughtered and then traded to the highest bidder.

But the one key fact that is neglected in the discussion is the potential of the human person that has been killed. From the moment of conception a human person begins to live, that life is an eternal being and has unlimited potential. Potential to bring joy to a family, Potential to change the course of nations, potential to fulfill the Great Commission of Jesus.

With all the discussion surrounding abortion focusing on the temporal, let us remember what the Bible says about human beings. The Bible is clear that every human is created in the image of God, (Genesis 1:26) and that all life is precious in the Lord’s design. The Psalmist writes in Psalm 127:3; “Children are a heritage from the LORD, offspring a reward from him.” David also wrote in Psalm 139:16; “Your eyes saw my unformed body; all the days ordained for me were written in your book before one of them came to be.”

Let us continue to pray and fight for the unborn, speaking up for those who cannot speak for themselves, praying that God would intervene and raise up leaders in our nation with the courage to stand against this scourge of our generation.