As I continue our series on the “why” of Christmas, we have two more questions today.

1: Why was he given the name of Jesus?

As Shakespeare once wrote in Romeo and Juliet, “What’s in a name?” We associate people or characteristics to names. Let’s face it, the reason we don’t like certain names is because we know someone by that name who by their actions or their personality, has marred the name for us.

But the name Jesus, is a name that means so much to us. Not because the letters themselves carry any sort of power in themselves, but because the man Jesus gives power to the name.

The name “Jesus” is the Greek equivalent of the Hebrew “Joshua”, and means, “God Saves”. Now the name Jesus was a common name at the time of his birth. The name Jesus continued to be popular during the life of Jesus, but after he died and rose again, the name was not used much at all. Historians have found that after the 1st century, it seemed that the name “Jesus” simply vanished from use in the region. The name Jesus took on a much more controversial meaning. For early Christians, the name Jesus means so much that they felt that no child was worthy to carry the same name as the Messiah. For those who did not believe that Jesus was the promised messiah, they did not want their child to be associated with such a controversial character.

Jesus taking a common name shows us that he came to the earth as a common person. The people of Israel were looking for someone to come as a mighty warrior as their messiah, so they missed him because he came as a carpenter.

Have you called on the name of Jesus?

Moving on to the next question, why did God announce the birth of Jesus to the Shepherds?

While shepherds had once been held in high esteem among God’s people, they had become unwanted, left out, and pushed to the side. They smelled like sheep. They slept on the ground. Their jobs made them little or no money and as a result they came from the lower rungs of society.

So why did God choose to announce the birth of the Messiah to a group of shepherds before anyone else?

Interestingly, Jesus was born in the line of David, the shepherd boy that God made a king. In Jesus, God took a king and made him into the sacrificial lamb. God constantly turns the ideas of man upside down. He chose Bethlehem rather than a larger city. He chose Mary and Joseph rather than a wealthy, respected couple. God chose the downtrodden and small people of Israel to be the chosen nation to host the savior of the world. When God chose to announce the birth of the Christ, he didn’t choose the emperor or the governor, or even the high priest, that would be a good option. No, God chose the people that no one would listen to, the people at the bottom of the societal structure. These shepherds probably had little education and quite possibly didn’t use the best language or display acceptable morals.

It appears God was setting the tone for the life and the message of Jesus. God was reaching to the humble people of society because Jesus was born in a humble location to humble parents. God always invites humble people to a special seat at His table.

Jesus displayed this in his ministry. Jesus always had time to minister to the poor, the lepers, and other outcasts of society. Jesus taught his disciples that serving leads to greatness (Mark 10:43).

God elevated the humble shepherds and made them the first evangelists. They left their sheep and quickly went to Bethlehem. After seeing Jesus, they immediately went out and proclaimed the Good News of the birth of the Messiah (Luke 2:17-18). The shepherds didn’t have a position in the synagogue or any theological training, but they met the Lord and became evangelists, they were changed forever.

One of the primary reasons people don’t share their faith is that they have not had a real encounter with Jesus. If you have a life changing encounter with Jesus, no one will be able to stop you from sharing the Good News. Maybe this Christmas season, it is time for you to make Jesus Lord of your life and begin living for him.

Another significant reason that God called the shepherds to be His messengers is that God Himself is a shepherd (see, Psalm 23, Isaiah 40:11, Ezekiel 34:11-16 and John 10:1-18). God wants us to know that He knows us and cares for us and will never abandon us. When the glory of Jesus’ birth was announced, it was announced to shepherds to remind us of our Shepherd and how much He loves us. The Christmas story is a story about God’s grace and His love for you and me.

Jesus came for the poor and the humble. Never underestimate the power of God to use those that the world has dismissed as uneducated, soft-spoken, or poor (see 1 Corinthians 1:26-27).

You may be listening this morning and thinking that God will never use you, the world has overlooked you pr you feel downtrodden. (1 Corinthians 1:26-27).

Do you know the call of God on your life? 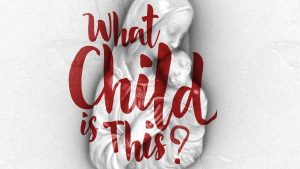 The Christmas carol “What Child Is This?” was published in the United Kingdom in 1871, and for close to one hundred and fifty years, the question found in the title of this carol has become an annual reminder that something significant happened on that night in Bethlehem as someone significant lay wrapped in swaddling clothes in a manger.

The title of the carol is intended to be the primary question the shepherds must have asked on the night they visited the baby Jesus. After their angelic encounter and receiving the startling news while they tended their sheep on the outskirts of Bethlehem, their heads must have been spinning as they tried to comprehend all they experienced on that first Christmas night.

While no nativity scene is complete without the shepherds’ presence, and the answer to this Christmas Carol’s question also would be only partial without the description of “shepherd.”

What child is this? He is a shepherd; Jesus described Himself as the good shepherd in John 10:11.

He is the one who came to lay His life down for all of humanity just as a good shepherd lays down his life for the sheep. While at times the shepherds in the Christmas story have been labeled as the ones who were a bit rough around the edges and living on the lowest rung of society’s ladder, Jesus describes Himself as being a shepherd who has great responsibility. There is no greater responsibility than holding the life of another in the control of one’s own hands. Protecting the life of others was the responsibility and calling of the shepherd.

The imagery of the shepherd is prominent in Ancient Near Eastern history. Shepherds were equated with righteous government and often appear in contexts where the subject of justice is prominent. Shepherds were expected to be the ones who showed kindness in counseling, protecting, and guiding those whom they were responsible for through every difficulty. Even the shepherd’s crook has been viewed throughout the ages as a symbol of power, authority, and strength.

shepherds are mentioned over one hundred times in the Bible. One of the first careers found in the pages of the Bible is that of the shepherd, Abel, the son of Adam and Eve was a shepherd (Genesis 4:2).

In the Bible, those who possessed flocks of sheep and other animals that needed shepherding, were viewed as wealthy and powerful. Great flocks and herds were seen as blessings from the hand of God. Abraham is an example of such a blessing of this type when he is described in Genesis 24:35. Jesus himself, speaks about having many sheep later in John 10:14-16.

Jesse’s son, David, was given the responsibility to take care of his father’s sheep before he would be called to care for and lead the people of Israel as their king. The place David was found before he was anointed as king by the prophet Samuel was out in the fields tending his father’s sheep in 1 Samuel 16.

Remember, the Lord sent Samuel to Jesse to anoint one of his sons as the future King of Israel. Jesse presents each of his sons before the great prophet and the Lord rejects all of them, finally Samuel asks Jesse in verse 11, “Are these all the sons you have?” Jesse responds that there is one more, but he is out tending the sheep. He is the little shepherd boy, and the thinking was that he could never be the future king.

Even after this incredibly significant anointing of David as the future king of Israel, he continued to fulfill his duties as a shepherd while King Saul still sat as the King of Israel.

What child is this? He is a shepherd and king just as his ancestor David.

The principal duty of the shepherd was to make sure that the animals under his care had enough food and water. David’s most famous Psalm speaks to this in Psalm 23, that begins with truth that echoes the answer to the question of the carol: What Child Is this? (see Psalm 23:1-2).

Just as the shepherd was responsible for the food and water provisions of the sheep, protecting the flock also was a priority that continually must be provided. When David was preparing to fight against Goliath, he told king Saul about his encounters with wild animals as he protected the sheep (1 Samuel 17:34-35)

What Child Is This? He is the one who will provide for and protect all who are under His care.

What child is this?  He is the one who left all the riches and comfort of heaven to look for the ones who went astray. The prophet Isaiah wrote, “All we like sheep have gone astray; we have turned—every one of us—to our own way.” (Isaiah 53:6).

This child in the manger would grow to become the one who came to seek and to save those who were lost, alone, exposed, and astray.

What child is this?

He is the one who came to lay down His life.

He is the one who came to provide for and protect His flock.

He is the one blessed with ones He would call His own and who would come to know His voice.

He is the one who is the good shepherd.