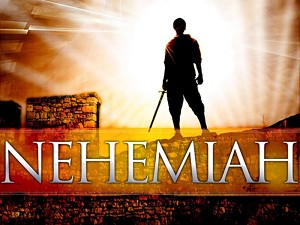 Opposition is a normal part of the Christian life, we need to realize that and not be surprised when the enemy comes with his stealth attacks on us. Last week I encouraged you to begin rebuilding; rebuilding in your personal life, praying and reading God’s word and then getting involved in ministry. But be sure that Satan does not want you to do that. He will try multiple ways in which to throw you off the path that God has for you. But challenges allow us to grow. As we encounter challenges, we learn to lean on our Heavenly Father. That is when true growth in our spiritual lives occurs.

Specifically we read about three men, Sanballat – who was the governor of Samaria; Tobiah who was a Persian official over the region of the Ammonites east of the Jordan and Geshem who was an Arab leader allied to the Samaritans. In these three chapters (4-6), we see multiple forms of opposition to the rebuilding of the walls of Jerusalem, culminating in chapter 6 in the direct attacks on Nehemiah himself.

The first attempt of intimidation against the people of Judah is found in ch4. It was a direct approach, the enemy was coming to kill the workers and put an end to the rebuilding process (4:11).

But Nehemiah encouraged the people to keep their eyes on the Lord (v14). The people rallied together and prepared themselves for the impending attack from the enemy. We read further in chapter 4 that they posted sentries and the workers worked with weapons in one hand to protect themselves. We don’t read that there was actually any attack rather it was a plot by Sanballat and Tobiah to intimidate and stop the building, but the end result was that the people rallied and came through the intimidation stronger and more committed to the project.

The second weapon that Satan used was to create disunity amongst the people. There was an intense famine in the land, coupled with the fact that many of the people were so committed to building the wall that they had neglected their own crops and businesses. The wealthy were beginning to lend to the poor and enslave them with high interest and impossible loan terms. This resulted in dissatisfaction and squabbling among the people. Nehemiah confronted the problem head on he did not wait and hope the problem would take care of itself (5:6). Here was a man who was obviously under stress and it didn’t take much to push him to anger. He was angry not only because of the injustice done to each other, he was angry because he saw the consequences of the disunity. The wall building was being hampered and the workers were being discouraged. Nehemiah once again displayed integrity and leadership in order to bring focus to the people of Judah.

Now in Chapter 6 we see the ways in which Sanballat, Tobiah and Geshem focus their attention directly on Nehemiah. The walls had been completed, but the gates were still not in place.

These three men suddenly pretended to want to meet Nehemiah in a display of goodwill, however Nehemiah realized and saw through their plot to do him harm. On four occasions they asked him to come out to them and each time he responded with the same answer v3; “I am carrying on a great project and cannot go down. Why should the work stop while I leave it and go down to you?” Nehemiah displayed discernment and determination as he refused to be influenced by their repeated offers.

The next plan the three enemies hatched was to discredit Nehemiah by slandering him and creating rumors in an attempt to upset the King of Persia. But Nehemiah is secure in the truth and he simply rebuffs their false accusations. And he identifies their true motives as we see in verse 9. Nehemiah knew where his strength lay and did not fear man or the attempts to discredit him.

The final attempt to ruin the mission of Nehemiah was what we read in our scripture portion today. This prophet Shemaiah had been hired by Sanballat and Tobiah to try to get Nehemiah to go into hiding in the temple. This seems like a reasonable suggestion, since there were obviously people trying to do away with Nehemiah.

Just one problem, Shemaiah’s proposal was directly opposed to the Law of Moses. Only the Priests and Levites could go beyond the Altar of burnt offerings at the temple. Numbers 18:7 stated that any layman entering this part of the temple is to be put to death. But Nehemiah saw that this was just an attempt to discredit him, to show him as a coward and as a man who had no regard for the Law of Moses. Nehemiah showed discernment and again Nehemiah prayed and went back to work.

Nehemiah showed incredible courage and perseverance, he could have quite easily given up and gone back to Susa and resumed his role as cupbearer to the King. However he knew that his mission was assigned by God and that God would protect and vindicate him. As a result the wall was completed in just 52 days, a remarkable and miraculous feat.

With every challenge that Nehemiah faced he seemed to grow stronger and more determined.

What is God calling you to build today? Last week I challenged you to begin rebuild the walls of your personal spiritual life and to ask the Lord where he would have you serve him. How has God been directing you? Are you feeling a stirring to begin building something for the Kingdom of God?

I guarantee you that as soon as you begin along the path of building something for the Kingdom of God you will encounter opposition. You will begin to have thoughts of doubt, thoughts along the lines of; “you can’t do this”, “you are not educated enough”, “you will just make a fool of yourself”, “you are going to lose your friends”, “if you get involved in that area of ministry, you will miss out on that favorite TV show”. The enemy will use every trick he has to prevent you from serving the Lord. However as you step forward in faith, you will see that God will give you grace and strength to accomplish more than you ever dreamt of.

Anything worth doing for the Kingdom of God will take somebody who walks in faith and determination. A holy determination, that believes in the promises of God.