As we have seen for the past two weeks, God speaks to us today in order to give us instructions for our lives and we need to learn obedience to the voice of God. But for many it is so hard to know the will of God for their lives. My friends that is simply not true. You and I were saved for a purpose, saved to bring Glory to God, not to simply try in our own abilities to get by and hope for the best. That is a meaningless and fruitless existence. God has a plan for your life and he communicates that plan to you, as you position yourself to hear from him.

Jeremiah was a prophet who was born in 648 B.C.; he grew up in the time of King Josiah and lived about two miles outside Jerusalem. He actually came from a family of priests and was familiar with the inner workings of the political arena in Israel at the time.

At the age of 20, God called Jeremiah to be his spokesman to the people of Judah. But Jeremiah protested, saying that he was too young. Last week we saw how Moses argued with God, trying to explain to God that he was not equipped to handle the task and responsibility that God had for him. Remember, when God calls you, he knows exactly who he is calling, he calls weak and broken people to be his greatest warriors.

Jeremiah’s ministry spanned 40 years, and he was the prophet who declared and saw the final days of Judah’s existence as an independent nation. He is often called the weeping prophet because of the personal anguish he knew in his ministry.

The book of Jeremiah is a collection of short sermons delivered during the rule of various different kings’ of Judah. Chapter 17 is a short poem contrasting the way of the wicked and sinful and the way of the righteous.

Judah had been relying on false gods, the idols of the nations in and around their land. They had also become reliant on foreign alliances that they had made and felt secure in their own abilities. They trusted in man and not in God, the one true God. Jeremiah then contrasts this with the person who trusts in God as their only hope and confidence. This person will flourish like a tree planted by the water, who when trials and dangers come, they will prosper and bear fruit. This is much like the psalm of David, when preparing to go to battle; Psalm 20:7:” 7Some boast in chariots and some in horses, But we will boast in the name of the LORD, our God.”

But Jeremiah saw the connection between putting faith in foreign alliances and lack of faith in God. The Lord revealed to him that the Babylonian empire was coming from the north and would be used by God to punish the idolatry and sins of the people of Judah. Now, it is not wrong to make alliances with foreign nations, but for Judah it was a clear sign that they did not trust God to take care of them; it was a lack of faith. As a result of their lack of faith, God was going to turn the Promised Land into a wasteland and the city of Jerusalem into a heap of rubble.

As you begin the practice of regularly listening to the voice of God in prayer and meditating on scripture, it is important that when you feel that God has given you an instruction that you write it down. We so easily forget, writing it down not only solidifies it in our minds, but it enables us to refer back to it in days and years to come. After you have written down test it, make sure that what you feel God is saying to you is not in contradiction to scripture and the revealed character and nature of God.

But then the final and most crucial aspect of all, you must move in obedience and action. We must be obedient; Jesus said in John 14:23; “if anyone loves me, he will obey my teaching” and the writer to the Hebrews writes; “Today, if you hear his voice, do not harden your hearts.” (Hebrews 4:7b).

You and I were saved for a purpose, if you know Jesus as your personal Lord and Savior, you have a responsibility to Love God and to Love others. We are called to live lives that make a difference and make an impact in our communities and work places. In order to be fruitful and make a difference we need to receive our marching orders- our plan of action from God. Do you know the voice of God? Do you receive your orders from God or are you like the People that Jeremiah was dealing with who were listening to those around them and making their plans trusting in the strength of mortal man. 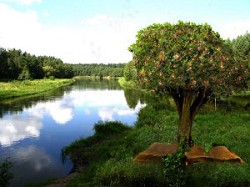 Today you can begin to live a life of fruitfulness and trusting in the Lord for the harvest. Be like the tree planted by the river, that never fails to produce fruit. You will know what God wants you to do; you will know the will of God for your life. This is not some unreal promise that seems too good to be true. It is available to all of us, not only that, it is required of us as followers of Jesus.