Abraham is a man who stands as a benchmark of faith in the bible, but what made this man so special?

Genesis 12 picks up the story some 4000 years ago, Abram, lived about 2090 years before Christ. We know that his father was Terah, and they were originally from a place called Ur. Ur was in modern day Iraq, and was an important center of culture in ancient Mesopotamia.

But if we look at the dates between the death of Terah and the age at which Abram was, we see that Abram moved on some 60 years before his father died. The first verse of chapter 12 says the Lord told Abram to leave his father’s household and move on, do not settle. I don’t think we fully grasp how difficult this must have been for Abram, leaving homeland and family was a huge risk in the ancient Middle Eastern culture.

Abram had no idea where he was going or what it would be like there, this was early civilization, the incident at the tower of Babel had occurred a few generations before, the world was splintering and there was no way to communicate. He did not have our 21st century communication tools, he was going in faith, leaving all he knew and to make his step in faith even more impressive, God didn’t tell him where he was going, God simply said, “go to the land I will show you”

Abraham knew that in leaving he would never see his family again, it was goodbye. Abram risked everything that he held most dear to be obedient to God. You will remember from the story of Abraham later on that he did a similar thing when he was prepared to offer his only son Isaac as a sacrifice in obedience to God.

Abram’s speedy response and ongoing obedience to God resulted in him being called the “spiritual father of all who have faith” Paul dedicates the entire Romans 4 to Abraham (see Romans 4:16-17).

But where did this faith come from? Surely Abram was brought up in a Godly home and taught the ways of the Lord?

Not so, Abram lived in the Old (Old) testament, before Moses and the giving of the law on mt Sinai. Abram grew up in Ur of the Chaldees, a city devoted to Nannar, the moon God. Abraham did not know the true God, probably his family worshipped gods and idols of the day. But then the God of the universe intervened in History, and He visited Abram and all of history changed. Abram left the idolatry and ways of the Chaldeans, and followed the one true God, because he met him and heard his voice!

Genesis 12:1 is the first recorded time when God speaks to Abram and he does so on seven different occasions in the rest of the account of the life of Abraham. But God gives Abraham two imperative instructions, the first is; “Leave your country and Go…” and the second is missed in some of our modern translations as we read verse 2, it literally means; “go and be a blessing”.

Abraham was told to leave his home and family and then to go and be a blessing to the nations he met along the way. Abraham’s calling had a purpose.

God made several promises to Abraham in verses 1-3, Firstly, the promise of a great nation. The fact that Jews, Christians and Muslims all call Abraham their father is a testament to this promise of God coming true, approximately half the world’s population. Secondly the promise of land, Abraham was promised land, but died with only a burial cave as his personal real estate (see Gen 23). The promise of the nation of Israel was to be fulfilled long after the death of Abraham. And then finally the best promise of all, the promise of a savior. Jesus is the fulfillment of the promise that Abraham’s people would be a blessing to all nations. Jesus is the blessing to all nations, the provision of salvation to all who would put their faith and trust in him as their savior. ‘ 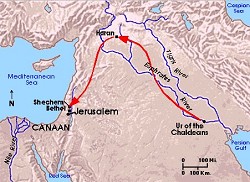 It all started with the God of creation speaking to a man who was receptive and open to God. The voice of God spoke and faith grew (See Romans 10:17). You may be wishing you had more faith, well the prescription is as simple as Romans 10:17, read the Word of God, live the Word of God and your faith which is more precious than Gold will grow and you will begin to touch other lives in ways you never even imagined.

No one is naturally born with faith, it is a gift of God and not something we can boast about in any way.

Faith is like a muscle, the more you exercise it the more it grows, but if you do not exercise it, your faith will wither and die.

As you begin to live a lifestyle of faith, you will discover two things;

With God’s strength in you, no test is impossible, and with his Grace, no failure is permanent.

You may have walked with the Lord for many years, but you have become sidelined, not because you are injured, but somewhere along the way you just lost your trust in God. He is your savior, but you just don’t have that experience of the life that it totally given over to him. This happens so easily in a world that teaches us to plan carefully our own futures, make sure you have a plan…. It would be irresponsible to live otherwise, wouldn’t it???

Rather than living the way that the world prescribes try living Proverbs 3:5 and 6 says; “Trust in the LORD with all your heart, and lean not on your own understanding; in all your ways acknowledge Him, And He shall direct your paths.”

Whatever it is, you know what God is telling you today, be obedient. God is not looking for your expertise or your credentials, he is simply looking for you to say yes. Will you say yes to him today and commit to a lifestyle of faith? You know when you see a daredevil perform a stunt on TV, they always say; “don’t try this at home”, but this is a dare that I want to challenge you to “try this at home” and let God build up your faith.