The Real Meaning of Christmas

If you know the Gospels you might be asking why I am preaching this first week of December on the Gospel of Mark and his introduction to Jesus. We pick up the account of John the Baptist pointing the way to Jesus, but Jesus was already born and about to start his ministry. So I might be accused of getting my chronology mixed up and jumping ahead of the story, but the fact is that we cannot talk about Christmas without looking to the cross, the crucifixion, death, burial and glorious resurrection of our Savior. Jesus came for a purpose.

The story of Christmas is a powerful miracle of the Son of God coming to earth in the form of a baby. However the world celebrates the little baby, the nice sweet Jesus who is meek and mild and who is contained safely in a manger in a stable. But Jesus came to change the world. He taught with authority, he recruited a band of brothers, he raised the dead, he was crucified and died, but he rose again and conquered death, he ascended to the right hand of the father and lives today ever interceding for you and me. This is the story of Jesus, the Gospel message.

The introduction or prologue of the Gospel of Mark begins with a triumphant declaration, leaving the reader with no doubt as to the identity of this man Jesus. He bypasses the birth narrative that Matthew and Luke describe in much detail. He focuses on the man, the Messiah. He starts with a man called John, who is called John the Baptist. John’s primary focus was to point the way towards Jesus. He was not like the Pharisees and religious leaders of the day, he was a humble man, and probably didn’t smell too good. He lived in the wilderness and ate locusts and wild honey. He was not someone who people were attracted to, but people came out to him in droves. Verse 5 states; “5 The whole Judean countryside and all the people of Jerusalem went out to him.” He had the attention of the people, but he pointed them to someone else. He was aware of his role and understood that he was unworthy even to untie the straps on the sandals of Jesus.

When the Gospel account of Mark begins, the people of Judah had experienced over a century of oppressive Roman occupation. The people of Judah were longing for the Messiah, the one who would come and establish his throne in Jerusalem. The people had been holding on to the writings of the prophets that spoke about the coming Messiah. Zechariah, predicted the coming Messiah about 500 years before Jesus’ birth. Micah prophesied about Jesus some 700 years before Christ. And Isaiah prophesied about Jesus around 700-740 BC. Even though they had these prophecies, they still did not expect Jesus to come and live the way that he did. They were waiting for a mighty ruler, a conquering hero, someone who would establish Israel as a powerful kingdom.

As we read Isaiah 9:6-7, it is plain to see how easily the people of Israel would have been looking for a mighty warrior king? But The Kingdom of God is not like earthly kingdoms. It is a kingdom of power; true power not the weak authority and power of earthly kingdoms that rise up quickly and the fade away. 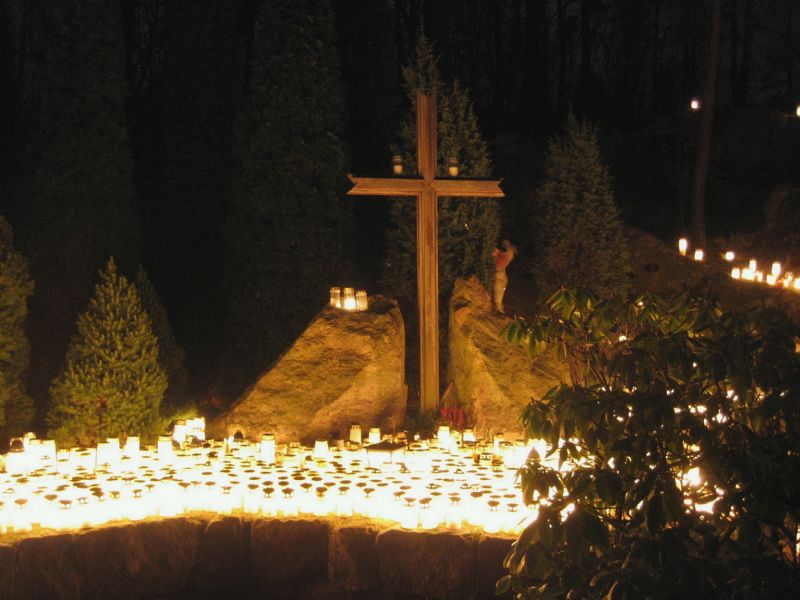 When Jesus did come he came to a spiritually dry and barren land. Those who were following the Law of God were following rituals and the Pharisees had added many many laws to burden the people. They saw the law as a burden to bear and not a way to salvation.

You may say to me “pastor this is Christmas, a joyous season, why are you talking about Jesus as the suffering servant?”

I would say that the Christmas story is just as much about Calvary as it is about Bethlehem. Jesus was born in a manger as a poor weak child in order to become the suffering servant of Calvary. Without Calvary and the cross, the manger is meaningless and just another story.

The Christmas story is one that we have heard many times over and we tend to lose the true facts of what took place some 2000 years ago.

In many respects, John the Baptist and the Prophet Isaiah are still calling out today. Calling out in a dry and barren world.

We are seeing Christmas lights all around, shinning in the darkness. But January is coming. You and I are meant to be the light of the World as Matthew 5:14 and 16 states;    14 “You are the light of the world………” and “16 In the same way, let your light shine before others, that they may see your good deeds and glorify your Father in heaven.”

That is our role, our commission, our privilege. We are to be the voices crying out in a dry and weary land, preparing the way for the coming Lord.

So in answer to the question that was asked in the title of this sermon; “why did Jesus have to come?”