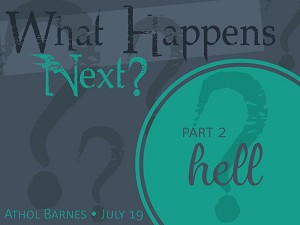 The doctrine of hell seems to be outmoded in these days, we don’t like to talk about it , and contrary to a few decades ago where it was preached regularly and taught clearly, today it seems to be viewed as old fashioned and irrelevant. Part of the problem I believe, is that in the past 20 years or so the evangelical world has focused so much on the love of God, which is a primary characteristic of his nature, that we find tension when we wish to discuss the judgment of God and eternal consequence for sin.

But the doctrine of eternal punishment is clearly taught in scripture. In fact Jesus spoke more about Hell than he did about Heaven. Matthew 8:12; Matthew 25; Mark 9:48; Matthew 22:13; Luke 16:19-31; Matthew 13 are some examples of Jesus’ teachings on Hell.

This is not an easy subject and it is weighty, we need to grasp what the Bible says about hell, and if we do, it will change the way in which we view the world around us. Unfortunately we are in a church age where preachers are reluctant to talk about this, because it is going to offend someone or our own innate sense of justice, as flawed as that is, seems to go against the truths of the scriptures.

The descriptions that Jesus uses for Hell involve fire and a place of torment. Mark 9:48, Jesus calls it a fire that is not quenched. Revelation 20:15 calls hell a lake of fire. Some argue that the term “fire” may be symbolic, and even if we say that then it must represent something that is worse than we can imagine. Even if we try to take the lake of fire and the fiery furnace as symbolic we must be confronted with the terrible thought that these symbols are not overstatements, but rather understatements of a reality that we would otherwise not be able to grasp. Jesus did not choose these pictures to tell us that hell is easier than burning.

Jesus also taught that Hell is a place of conscious torment Luke 16 and in Matthew 22:13 he said it is a place of outer darkness. Hell is real; it is eternal as we read in Matthew 25:46. Not only is hell eternal it is also conscious, all the images that we read of hell in the Bible point to the fact that it is going to be an experiential eternity. This is the experiencing of the wrath of God – it is the reality of our sins before an infinitely holy God.

But the wonderful news that we have today is that Hell is escapable. No-one has to spend eternity in torment, anyone can be saved. Jesus took our punishment on the cross and as a result, those who place their trust in him as their personal Lord and savior will escape the fire of hell.

Jesus often taught in magnificent parables. But in those very same parables the theme is re-iterated that the kingdom of God means that some will be brought into the glory of the fellowship of God’s people and, on the other hand, there will be those who remain outside.

If we take all these word pictures from Jesus and the Apostles we see a common description of what hell includes;

Hell is the outpouring of the wrath of God on sinners. When Jesus was praying in the garden of Gethsemane when and asked that this cup be taken from him in Matthew 26:39, he was not simply asking for the occasion to be taken away.

He was looking to the prophetic revelation John received in Revelation 14: 10, in describing the punishment of those who worshipped the beast in the last days. Jesus experienced the cup of God’s wrath. The Beloved Son became sin for us and experienced the full amount of the wrath of God. As we read in 2 Corinthians 5:21.

Jesus took the full punishment of the wrath of God, Jesus the eternal son of God, always in the presence of God, was separated from God as God had to turn away from him when he took on the sins of the world. That is the suffering of Jesus on the cross, the physical pain was real but the cup of the wrath of God was infinitely more painful and excruciating.

The future judgment of unbelievers will not only be final and irreversible, it will also be eternal. On the basis of Scripture we have to reject the doctrine of universalism which is so popular today, which says that all people will eventually be saved.

It is important to note that God does not send anyone to hell (1 Peter 3:9). It is not God’s choice to have man spend eternity in hell, but the sin of the individual sends them there. As C.S. Lewis puts it; “The doors of hell are locked from the inside.” Ever since Adam and Eve sinned and rebelled against God mankind has been saying to God; “go away and leave me alone” Hell is God’s way of granting that wish.

Hell is not an easy subject to talk about, but we must, it is imperative that we are provoked to share the wonderful message of the Gospel with others because we are driven with compassion for them. The reason we are driven by compassion is that we know that we too are sinners saved only by the grace of God.

John Piper wrote; “When the heart not longer feels the truth of hell, the Gospel passes from good news to simply news.”

The saving Gospel is good news!