Part 4 – The Discipline of Giving.

As the final discipline in this series, we are going to briefly look at the discipline of giving. More often than not, the one discipline we struggle with the most is the giving of our financial resources.

From time to time we all worry about our finances, but many pastors don’t want to preach on money and the rewards of giving for fear of sounding like the prosperity gospel peddlers. Those who preach this way teach that we must become transactional in our dealings with God. But we cannot bribe God, He doesn’t need your money, he already owns it all (see psalm 40:6 and Psalm 24:1). The bible tells us that ‘God loves a cheerful giver’, but if we give out of our selfish ambition and self-interest, God sees it for what it really is.

Stewardship is a term that has been in the church for centuries. In our modern English, stewardship seems to have been assigned to building campaigns or fundraisers. But The word comes from an old English concept of being a steward of the property owned by the lord of the land. The lord owned all the land, the buildings and all the commerce that took place in his realm. The stewards didn’t own anything, but they managed the crops, the labor, the taxes and all the day to day running of the land. In return for this service the lord of the land gave protection, food, housing for the steward.

God owns it all, he owns everything that you think you own. But just like the old stewards, we are called to be stewards for our Lord. We are going to be called on to give an account for what He has given us to manage or to steward. That is what Stewardship is. This is a huge paradigm shift for most people, as we have been raised and taught all our lives that we own things, that we have things and money because we deserve them. But the reality is that everything we have is only ours to steward or manage for God, because after we die, we no longer have ownership over it.

There is a fundamental connection between our spiritual lives and how we think and act about our finances. Fifteen percent of all the teaching we have recorded in the Bible from Jesus relates to money.

The passage of scripture found in Luke 12 is a passage that the western church finds uncomfortable. This is one of those passages that we try to rationalize and water down, because the raw truth is hard to take. Is Jesus saying that we shouldn’t save for a rainy day, or save for retirement? Our culture says that is not wise, it is simply not prudent. This wealthy man had wealth stored up for years, and God said, “you fool!” Now, I am not saying that it is wrong to be wealthy and to have wealth, but this man’s error was that he looked at his wealth as his security, he no longer trusted God for his daily bread, his wealth took the place of God in his life. His wealth had become his idol, his prudence had become his idol. And in many cases in our lives there is a very fine line between prudence and idolatry.

“He is no fool who gives what he cannot keep to gain that which he cannot lose.” ― Jim Elliot

As Jesus turns aside to his disciples in verse 22, and in the next few verses Jesus uses the words, “do not worry” or “do not be afraid” four times. Jesus isn’t suggesting this, he is giving a command; “do not worry”. It is a directive from the creator of the universe, therefore, if we worry about possessions, food, clothing or that rainy day that may never come, it is a sin that we need to repent of.

Randy Alcorn in his book “the treasure principle” breaks down this teaching and Matthew 6. As we give away what we cannot keep, we literally are putting treasure in heaven.

The legalist will tell you that you must give, but in reality, you don’t have to give, but you will be so glad you did. You will be eternally blessed as you give.

Imagine you were Alive during the civil war, you are a northerner, however you were living and doing business in the South. During this time you had accumulated a lot of confederate currency. As you saw the war coming to an end you planned to go back home to the North. So what do you do with all the confederate money you had saved up? After the war it would be worthless as it was not official US currency. Well naturally, you would cash in the money and change it for US currency. You would keep only enough confederate money to meet your immediate short term needs. As Christians, we have inside information, knowledge of how this all ends. We know that when Jesus comes again, all our hard-earned currency will be worthless. Everything you have will be worthless to you when Jesus comes again, or you die. Either of those could happen today.

Some years ago I obtained a real treasure, it is a 500 million Zimbabwean dollar, however it has an expiration date. At the time the country had an inflation rate of 3000%, and the money became worthless after a certain period of time. We may laugh at this, but do you realize that every dollar you have has an expiration date; when you die, it becomes worthless to you. 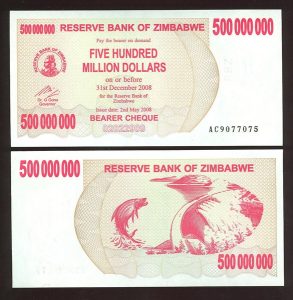 We have this false idea that as long as we get through this life and believe in the name of Jesus, then we will get wonderful blessings and rewards in heaven. The bible is clear that there will be different rewards given to different people. Those who have not invested in eternal treasures will get a meager reward in heaven. Those who have little regard for temporal treasures, but rather choose to invest them eternally, will receive a return on investment that will make any wall street stock market gain seem miniscule.