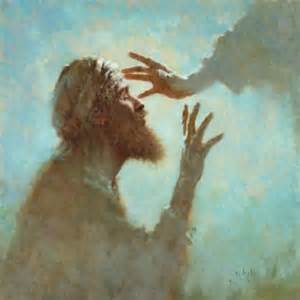 This week we remember Palm Sunday, the day Jesus rode into Jerusalem on a donkey with crowds cheering him on. Before this day, Jesus had been preparing his disciples for His crucifixion In the Gospel of Luke, he tells them three times what is going to happen in Jerusalem, but they do not understand what he is talking about. To them, Jesus was the invincible Messiah and he was heading to Jerusalem to establish his earthly throne. They did not see the full picture and the amazing purpose of God for Jesus coming to the earth.

Jesus takes his disciples aside and begins by saying that everything that is written through the prophets about him will be accomplished. The disciples knew the scriptures and would have been taught that the Messiah would come and re-establish Israel as a mighty nation. But they did not dwell on passages like Isaiah 53, the prophecy about the suffering servant, rejected by man and even punished by God. That prophecy didn’t fit their understanding or their paradigm of what God was about to do. As Jesus begins to elaborate, the Gospel of Matthew makes it clear that Jesus predicted his death would be by crucifixion; the type of death that was for the worst criminals, the type of death that, according to the Law of Moses, meant the person was under a curse by God.

No other person in all of history was less deserving of suffering than Jesus. Not only did Jesus suffer an excruciating death, he also took on the full punishment of the wrath of God for our sins. That was the real suffering of the cross. It was a suffering by design; it was the plan of God all along (see Isaiah 53:10).

In verse 34 we read; “The disciples did not understand any of this. Its meaning was hidden from them, and they did not know what he was talking about”. Luke emphasizes the lack of understanding by repeating it three times. The disciples were blind, they did not see with spiritual eyes, they were looking for the establishment of an earthly kingdom but the truth was hidden from them.

In order to reinforce their lack of understanding, the very next miracle we have recorded is that of Jesus healing a blind man. It is clear that when Luke penned this Gospel, he knew what he was doing when he wrote about the healing of the blind man. Jesus performed many miracles that were not recorded for us in the Bible, but this one was significant and it’s positioning in the Gospel is key. Notice the desperation in this blind man, he was rebuked and told to be quiet by the crowd, but he kept on yelling with all his might. The reason he was so desperate was that he understood his blindness, and he had faith that Jesus could do something about it.

Notice the contrast; here was a blind man who was desperate to be able to see, and on the other hand, you have the disciples, those closest to Jesus, who were spiritually blind to what was about to take place. The most significant event in human history was lost on those participating in it, because they were expecting something else.

The blind man knew who Jesus was, he recognized that Jesus was the Messiah; he praised God and followed Jesus.

Remember the words of Jesus to the Laodicean church in Revelation 3:17, “For you say, ‘I’m rich; I have become wealthy and need nothing,’ and you don’t realize that you are wretched, pitiful, poor, blind, and naked.”  This letter to the Laodicean church was not to those who did not believe in Jesus, this was the early church, they were blind, because they did not completely grasp the truth of the Gospel.

Jesus was with God at the beginning of creation, he spoke the earth into existence. Jesus also knew that when he created that hill called Calvary, he would ultimately suffer and die on that hill. Jesus also formed the tree that was cut down to make the cross. He created the instruments of his own suffering, because of his love for you. Jesus not only prepared the instruments of his suffering, he also willingly walked into Jerusalem on this day two thousand years ago. It was because of his love for you that he made this journey to Jerusalem and willingly subjected himself to the excruciating death on the cross.

As we go into this week, a week where all around us we see the cross – that should remind us of the foundation of our faith. Without the cross, we have no Savior, and without the resurrection we have no hope.

The truth about Jesus was hidden from those around him when he walked the earth. And in the same way the truth of the word of God is not self-evident.  The truths of the Word of God are revealed to us by the Holy Spirit. When God starts speaking to you through His Word, it comes alive and in fact you wake up in the morning, looking for the Bible.

As you read about the crucifixion account in the Gospels this week, spend time praying and asking the Holy Spirit to give you insight and understanding. But make it personal, realizing that Jesus was thinking about you as he walked the road to Jerusalem.

My prayer for all of us is that if there is an area of spiritual blindness, the Holy Spirit would give us eyes to see and ears to hear. As Jesus said to his disciples on another occasion in Matthew 13:16, “But blessed are your eyes because they see, and your ears because they hear.”