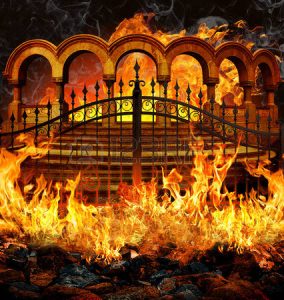 There was a day when all one seemed to hear was “fire and brimstone” sermons, we’ve now gone to the opposite extreme. There is so much preaching on love, grace, and forgiveness, but little or nothing is said about hell. The undeniable truth is that no one in the Bible places more stress on hell as the final consequence of God’s judgment of condemnation than Jesus. Jesus compared hell to the burning trash dump outside of Jerusalem called the valley of Hinnom or Gehenna, he also compared hell to a prison and outer darkness. Jesus likened hell to “a fire” at least twenty separate times.

In Luke 16 we read that Jesus told the Pharisees a story of a poor man called Lazarus and an unnamed rich man. Jesus doesn’t say that this was a parable. It may have been a true account of which only Jesus knew the truth. Or it was a parable that Jesus used to teach the Pharisees the truth of their own lostness.

The rich man was extravagant in his lifestyle, dressing in fine linen, Jesus even said that he feasted every day. And then as if a divinely arranged contrast, we have Lazarus, a poor beggar sitting at his gate, who was possibly a cripple. The name Lazarus means “God is my help”, in contrast, the rich man trusts in his wealth.

Both these men died, and Lazarus taken by the angels to Abraham’s side. He was given special treatment for a man who was never treated well in this life. In contrast, the rich man, “died and was buried”, no angels, no special treatment. His friends probably began fighting over his estate and soon forgot that he even existed.

The rich man may have had a prestigious funeral with many dignitaries, in contrast the poor Lazarus, probably didn’t have a funeral at all, in fact the body of Lazarus might have been thrown on the burning rubbish dump, Gehenna, the place where unclaimed bodies would have been disposed. But even though his body was burned and discarded, he was taken by angels to Abraham’s side.

The rich man is sent to Hades, a place of torment and utter loneliness, where he begins to cry out for mercy. First, he asks that Abraham sends Lazarus to dip the end of his finger in water to cool his tongue. The rich man was experiencing torment and real flames, it was a very genuine experience, so much so, that a little cool water on his tongue would bring some relief. Abraham responds and explains to the rich man that he has already received his good things in his life, but by rejecting God, he is never going to experience anything good ever again.

But aside from that, Abraham says it is impossible for Lazarus to come to him, there is a great divide between heaven and hell.

Jesus taught that Hell is a real place of eternal suffering, but the worst part of hell is not the physical pain, it is the absence of the presence of God. We have all heard someone say, “Well, I don’t mind if I go to hell. I’ll have a lot of company!” But there is no friendship or “company” in hell! Hell is a place of total loneliness and abandonment.

So how can a loving God permit such a place to exist, let alone send people there?” In asking that question, we reveal that we don’t understand the love of God or the wickedness of sin. God’s love is a perfect holy love, not a shallow sentiment, and sin is rebellion against an all holy and loving God (1 John 1:5).

God does not send people to hell, they send themselves there by refusing to believe on His Son. Hell, ultimately is the absence of God and sin is what separates us from God (Isaiah 59:2). Hell is the natural response of the all-holy God to the wickedness of sin, and unbelief in Jesus as the son of God is the primary source of that wickedness.

God hates sin and evil so much, that he sent his only son Jesus to suffer and die on the cross as the perfect sacrifice, atoning for our sins. Jesus went to the cross as our substitute because he does not want anyone to go to Hell (2 Peter 3:8-10).

The rich man begs Abraham to send Lazarus to warn his five brothers about their eternal destination. But Abraham tells him that they have the words of Moses and the prophets, the Old Testament Scriptures, the word of God. But the rich man argues that this is not enough, they need miracle. We are no different, we struggle to believe in the power of the word of God to transform lives. We must never underestimate the power of the word of God, under the direction and conviction of the Holy Spirit to transform lives (Romans 1:16).

Jesus loved us so much that he spoke about hell a lot. He did not hold back in describing the consequences of sin.

Do we believe in Hell enough to care for our friends and neighbors? If we really believed in Hell, we would not hesitate to share the Gospel, we would give our lives to praying for the lost. We would re-organize our lives in such a way that we would maximize our time on this earth to be able to be witnesses for Jesus Christ.

Sadly, the way our churches operate, the way we struggle to pray for our neighbors, the way our evangelism and mission efforts are so weak and small, we give evidence to the fact that we do not believe in hell.

In the 21st century in the western culture has become a source of unending distractions and entertainment. We focus on our careers, movies, food, sport or hobbies, while all the time our perspective of eternity is being whittled away and we seldom think of the fact that our lives are so very brief.

Live your life in the light of eternity. Every pleasure you could have here on earth ultimately passes away, it is fleeting, but if we live for eternity, storing up for ourselves treasures in heaven, we will experience pleasure that is lasting.

“The safest road to hell, is the gradual one—the gentle slope, soft underfoot, without sudden turnings, without milestones, without signposts.” C.S Lewis.