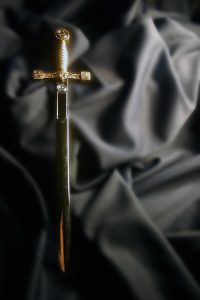 Have you ever questioned whether or not God was speaking to you? God sent his only Son in order to restore His relationship with you, why would He not speak to you if you have given your life over to the lordship of Jesus Christ?

Gideon was called by God to be the deliverer of the Israelites from the oppressive hand of the Midianites in Judges Chapter 6. It was an overwhelming task and Gideon is understandably cautious.  Gideon was almost certain that he was talking to God, but he needed a sign. He rushes off to prepare a meal from his meager supplies, killing a young goat he makes some unleavened cakes and some broth, bringing it to this Holy Messenger.

It is quite possible that Gideon was thinking that this meal would be a test to see who this messenger was. If he ate the meal, then he was a prophet, but if he didn’t eat the food, maybe disposed of it some way, it just might be a divine messenger.

The angel tells him to put the meat and broth on the rock, which was probably the winepress stone, and then proceeds to touch the meat and the unleavened cakes with the tip of his staff. Immediately fire came up out of the rock and consumed the meal.

There has only ever been one person pure enough to be able to stand in the presence of the holiness of God. That person is the pure spotless lamb of God, Jesus himself. All humanity is born in sin and as a result, we could never live if we were to be exposed to the holiness of God, it would consume us. That is why, what Jesus did on the cross, by providing a way for us to have communion with God, is so incredible.

The Angel of the Lord disappears, but God doesn’t stop speaking to Gideon, the physical manifestation of his presence has gone, but God continues to speak and calms him down. God says to him, “peace be to you, do not fear, you shall not die”. God’s presence and name brings peace. Maybe you are lacking peace right now, you are worried about finances, your future or maybe your child’s future. Have you spent time asking the Prince of Peace for his peace in your life?

The Bible is full of promises of peace from God, here are three verses you can meditate on, Hebrews 13:5-6, Psalms 27:1 and Isaiah 41:10. My friends, fear and anxiety must melt in the presence of the Lord, go to him, spend time with him.

As soon as Gideon calmed down, he built an altar, and he called it Jehovah-Shalom, the Lord is Peace. In a land where there were idols and altars to false gods, Gideon builds an altar to the one true God, a place that he can come back to and remember his encounter with the Lord. Gideon knew that he would need a reminder and a place he could come back to when times got tough.

God spoke to Gideon and called him to be the next leader of the people of Israel. The Bible is full of accounts of people that God spoke to, and God still speaks today, calling people and activating them in ministry.

You may say that God doesn’t speak to you, you are not unique in this feeling, but the truth is that if you have given your life to the Lordship of Jesus, God will speak to you and direct you, you are just not listening!

Psalm 46:10 says” Be still and know that I am God.” Just be quiet and let him speak! There are so many things competing for our attention that it is hard for us to hear God’s voice, we need to get away from the noise of our busy lives and spend time quietly before God.

God speaks to us primarily through His Word the Bible.  When Joshua led the Children of Israel across the Jordan in Joshua 4, the Lord told them to take twelve stones out of the river and set them in place on the west side of the Jordan, so that they could remember what God had done for them.

We should have memorial stones, and the best memorial stones are Bible verses. Verses from the Bible that we can go back to and be reminded of His faithfulness and His promises. As we memorize and meditate on these memorial stone scripture texts, our lives will be enriched as we grow in our relationship with the Author of the Bible.