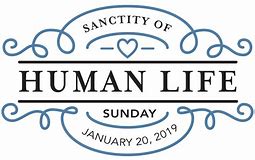 On January 13, 1984, President Ronald Reagan issued a proclamation designating January 22 as the first National Sanctity of Human Life Day. (January 22, 1973, was the day the U.S. Supreme Court legalized abortion-on-demand in all 50 states.) Churches around the United States use the day to celebrate God’s gift of life, commemorate the many lives lost to abortion, and commit themselves to protecting human life at every stage. This year, Americans will celebrate life on January 20, this coming Sunday.

The National Sanctity of Human Life Day, is more than a fight to end the horror of abortion, the church must also see the need to protect and take in those that are born despite the efforts of the abortion industry. As we pray for the ending of abortion, we must be equipping ourselves to care for the orphans, James 1:27. As you know, Debbie and I have adopted our two children. They have brought us such joy and blessing, but also as they have come to terms with their adoption, they have gained a unique insight into God’s heart for adoption.

Recently Christie gave a speech for her school assembly and I asked her permission to share an excerpt from that speech in this article. This is what she shared with her schoolmates and teachers.

I was adopted at the age of 6. I wasn’t an actual orphan, but I was in a position far worse: I was a stranger to the family of God. Now as a 6-year-old you may not understand everything about being Christian, but as you get older you will understand what it truly means. When you become a Christian and understand the sacrifice Jesus made, you too have been adopted. Maybe not physically, I know some have, but spiritually.

Galatians 4:4-7 says,” But when the set time had fully come, God sent his Son, born of a woman, born under the law, to redeem those under the law, that we might receive the spirit of adoption to sonship. Because you are his sons, God sent the Spirit of his Son into our hearts, the Spirit who calls out, ‘Abba, Father’. So, you are no longer a slave, but God’s child; and since you are his child, God has made you also heir.”

God the righteous judge is our merciful Father. Romans 8:14 says,” For those who are led by the Spirit of God are the children of God.”

No matter what we have done in the past or what is to come, God is our merciful Father.

Christie ended her speech with an altar call and a number of children responded.

Christie was legally adopted before she turned one, but she was adopted into the family of God at the age of 6. I praise God that He is the perfect Father. Have you been adopted?