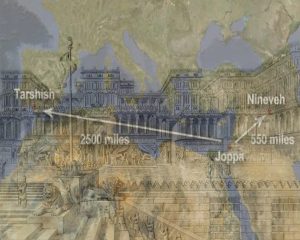 Jonah lived sometime around 760 BC, in one of the best times for the nation of Israel. Under the leadership of Jeroboam II, the northern Kingdom had a significant recovery, you can read about this in 2nd Kings 14.

Some forty years before the Assyrians destroyed the Northern Kingdom of Israel, the prophet Jonah was sent from Israel to preach in the enemy capital of Nineveh. The Assyrian nation was a regional superpower at the time, and for decades the Assyrians were threatening and terrorizing the Israelites. Jonah probably enjoyed being a prophet to the Hebrews, but when God asked him to preach against the enemy nation, he began to run into some problems.

As we read Jonah ran away from God and goes to Joppa which is near modern day Tel a Viv in Israel. Jonah pre-pays for his ticket, making certain that he can get a place on the ship heading to Tarshish. The port of Tarshish was at the southern end of Spain and at that time it was the furthest west any ship would venture.

Jonah had a one-way ticket, it was a journey to the ends of the earth, such was his fear of the task that God had called him to.

It is no different today when people encounter the storms of life, they look for relief and help any way they can. People today try to fix spiritual problems with medication, counselling or drugs, but only God can heal the brokenness of the human heart.

In the middle of the storm, Jonah slept. Just like we read that Jesus was asleep in the bottom of the boat in Mark 4 as the storm is raging around the disciples in the boat.

Jonah had given up on life, he had left all behind and had a one-way ticket to oblivion, he did not care if he lived or died. But Jesus slept in absolute security and peace, knowing that God the Father was going to protect and keep him from all harm. If you know that you are doing what God has called you to do, you can sleep in absolute peace, because He will keep you from all harm.

The sailors cast lots, they roll a dice to see who caused this unprecedented storm, the lot falls on Jonah and they begin to interrogate him. We read in verse 8 that they ask him 5 short but very direct questions. Jonah’s answer is clear and to the point (see Jonah 1:9).

Notice something about Jonah’s response, even though he is hiding from God and he is hoping to die, he still says; “I worship the Lord…”. Deep in his heart, Jonah knew the truth and it came out in his time of desperation.

The Bible says that His answer terrified the other sailors. They knew he was running away from God, but now they saw the terrible consequences of his actions, and they began to realize that Jonah’s God was the one true God. Notice again another similarity between Jonah and the account of Jesus calming the storm in Mark 4:41.

It took a raging storm for the sailors to be terrified of the one true God in Jonah 1, but it took the calming of the storm to terrify the disciples in Mark 4. When anyone encounters the undeniable presence of the all Holy God, it changes you. These sailors were being changed as they encountered God.

Jonah takes responsibility for his actions and one would think he would repent and ask God for a second chance. But he is so determined not to preach to the Ninevites, that he would rather die – “Throw me into the sea” he says.

The heathen sailors start praying to God and ask for forgiveness for what they are about to do, then they pick the prophet up and toss him into the sea. Immediately the sea is calm. The sailors feared the Lord and in repentance they offered sacrifices and make vows to God. These sailors were converted to worshipping the one true God.

What was the real sin that Jonah committed? We always assume that the sin was rebellion, but I believe it was more than that.

It wasn’t his fear of the Ninevites, that made Jonah go in the opposite direction, it was the Character of God that made him run away. Jonah knew Psalm 103:8, he wasn’t afraid the Ninevites would hurt him, he was afraid that God would remain true to His character and forgive them. The real sin of Jonah was not rebellion, but rather prejudice.

Jesus taught in the Sermon on the Mount that we are to love our enemies (Matt. 5:44), reflecting the character of God. The Great Commission still applies to us today, we have been given a message and so often our prejudice towards other people stops us from being obedient to God.

We all have prejudice, we shy away from people who are not like us. Those neighbors who are maybe a different skin color, or speak a different language, or maybe they don’t fit our social circle.

Sometimes the Lord must bring a storm into our lives in order to reveal the prejudice in our lives.

When we read the account of Jonah, who do we identify with? Most of us identify with Jonah, the disobedient messenger. But the story of Jonah is not our story, our story is that of the Ninevites. We were once alienated from God, we were enemies of God (see Romans 5).