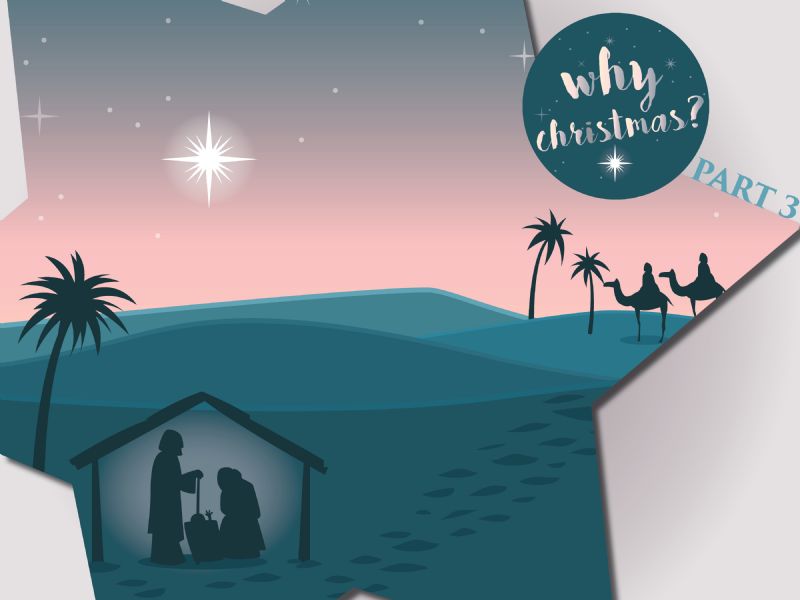 As I continue our series on the why of Christmas, today I have three more questions. Why was he given the name of Jesus? Why did the son of God, come to earth as a baby? And finally, I want to pose the question, are you born again?

As Shakespeare once wrote in Romeo and Juliet, “What’s in a name?” We associate people or characteristics to names. Let’s face it, the reason we don’t like certain names is because we know someone by that name that by their actions or their personality, has ruined the name for us.

But the name Jesus is a name that means so much to us. Not because the letters themselves grouped together carry any sort of power in themselves, but the man Jesus gives power to the name.

The name Jesus is the Greek equivalent of the Hebrew “Joshua”, and means, “God Saves”. Now the Hebrew name Joshua, and the Greek equivalent Jesus, were common names at the time of Jesus’ birth. The name Jesus continued to be popular during the life of Jesus, but after he died and rose again, the name was not used much at all. Historians have found that after the 1st century, it seems that the name Jesus simply vanished from use in the region. The name Jesus, took on a much more controversial meaning. For early Christians, the name Jesus means so much that they felt that no child was worthy to carry the same name as the messiah. For those who did not believe that Jesus was the promised messiah, did not want their child to be associated with such a controversial character.

Jesus taking a common name, shows us that he came to the earth as a common person. The people of Israel were looking for someone to come as a mighty warrior as their messiah, they missed him because he came as a carpenter.

Why didn’t he simply appear as a full-grown man, and begin to perform miraculous signs and wonders. Why did Jesus go through all the difficulties and challenges of youth, and then only begin his ministry when he was thirty? The teachers of the day when speaking of the promised Messiah, must have described someone who had the Wisdom of Solomon, the charisma and authority of David, the leadership ability of Moses and the military genius of Joshua. But instead, Jesus comes into the world as a little baby, weak, needy, and humble, just like any other baby.

But Jesus was both God and man, virgin birth is proof that he was divine, he was not a product of this world, he was God, but being born as an infant, shows that he was also human in every way. Jesus went through trials and testing of; childhood, adolescence and being a young man (see Hebrews 4:15).

If Jesus did not take on the form of a man, his sacrifice would have been unconvincing, because he would have been aloof and separated from the common man. If Jesus had been a mere man and not God also, he would have died a martyr’s death, just like thousands of others. We are able to trust this same Jesus with our lives, because he knows what we are going through and he overcame the world and all its temptations.

So we come to our last question today, why you need to be born again. Jesus came as a baby, he took on flesh, he took on a new name and he came in order to be the savior of all who would put their trust in him.

Jesus in speaking to the Pharisee named Nicodemus made this profound statement; “Very truly I tell you, no one can see the kingdom of God unless they are born again.” John 3:3. The term Jesus used; “Born again”, can be translated in the Greek to say Born from Above. This means there is a spiritual dynamic to this new birth (Read John 1:12-13). So what does it mean to be born of God? We call this transition by many different names, we say, “I was saved”, “I became a Christian”, “I decided to follow Christ” and “I became a believer”. And for many people what this translates to is a decision to raise your hand in a meeting or walk down the aisle at a service for prayer. But the truth is that there are many people who claim to be Christians, who show no evidence of a transformed life, they show no evidence of being born from above.

Jesus made it clear that to follow him was not a simple decision or a raising of the hand; to follow Jesus means to die to your old self, to take on a new name, to completely give everything you have to God. When we are born again, we take on the name of Jesus, we become so closely identified with him, that we are his ambassadors for Christ, as Paul says in  2 Corinthians 5:20. Do we understand what this means?

Is he Lord of your life? Are you living every day as His ambassador? This is what it means to be a Christian.