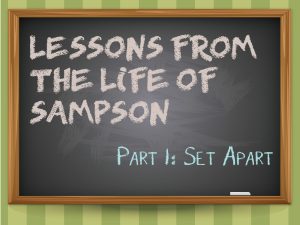 Do you know who you are? In answer to that question most would answer by stating where they were born, what do you do for a living or how many children or grandchildren you have and if you were brave, you might say your age. We all have an identity, we all have identifiers that we tell people in order for them to know about us and possibly categorize us.

But the truth is, this not how I am defined in the sight of God. Christians face an identity crisis in the modern world. I believe that we struggle simply because we don’t know who we are.

Samson the Judge was one person in the Bible who did not have a clear understanding of his identity, and as a result he missed out on living to his fullest potential.

This period of time in the nation of Israel is called the period of the Judges, roughly 1375 BC to 1050 BC.

Joshua died and left the nation with two instructions, defeat the remaining Canaanites and obey the law of Moses. The children of Israel do neither. The begin to relax and integrate with the local tribes and adopt their religions. During this period there began a familiar cycle; the Israelites rebelled against God, God punishes them by sending oppressive nations to rule over them, Israel repents and cries out to God for deliverance and God sends a hero, a mighty leader who stops the oppression.

That is the period of the judges, the time between Joshua and the anointing of King Saul. Sampson was the most famous judge who was appointed by God to be a Nazarite. A Nazarite was someone who takes a vow of consecration and dedication to the Lord. The Nazarite had three requirements, never to eat or drink anything that came from a grape vine, never to cut their hair, and never to be in the presence of a dead body. The purpose of the Nazarite vow was for a period of consecration, in order to seek the Lord. Sampson on the other hand was to be a Nazirite from birth, for all his life. He didn’t have a choice in the matter, he was a special child.

Sampson’s parents were unusual in their dedication and commitment. They were godly people who prayed and understood the importance of the sacrificial system. (Read the Prayers of Manoah in Judges 13:8 and 12).

Manoah had faith that what God told him was going to happen, and he also knew that he needed to hear from God the instructions he needed to raise up this child. In a time of spiritual darkness, God found a couple who were faithful to Him. Sampson was being born into a good home.

In addition to this, the promise of the Angel of the Lord in verse 5 says that: “He will take the lead in delivering Israel from the hands of the Philistines.” It was a promise over his life even before he was born, he was destined for greatness.

So much potential was promised and early in his childhood we read in verse 24; “and the Spirit of the Lord began to stir him while he was in Mahaneh Dan..” He was destined for a life of unlimited potential, unfortunately he did not keep the requirements and he failed to live up to his potential. His poor choices limited his potential.

The truth is that when you and I became followers of Jesus Christ and we are filled with the Holy Spirit, our potential changes, we become people of unlimited potential.

Getting back to that question, do you know who you are?

The Bible is full of descriptions of our identity in Christ; 1 Peter 2:9-10 says; “But you are a chosen people, a royal priesthood, a holy nation, God’s special possession, that you may declare the praises of him who called you out of darkness into his wonderful light. 10 Once you were not a people, but now you are the people of God; once you had not received mercy, but now you have received mercy.”

Too many Christians are walking around in fear, anxious of what might happen tomorrow, this is a symptom of mistaken identity. We fear because we don’t know who we are, we fear because we simply don’t grasp the awesome power of God. We need to walk as Children of the King.

When you and I become followers of Jesus Christ, we begin a new life, we are born again. No matter how old or young we are, we begin a new life of unlimited potential. Sampson began life with unlimited potential, but as we will see next week, he made poor choices and threw away that potential. Maybe you realize that you have not lived up to your potential as a Christian, you are still living for yourself, making poor choices, not trusting God with your life and your future. You realize that you have an identity crisis, and need a fresh understanding of what it means to be a child of the King. A prince or a princess in the kingdom of God.

Pray that God will give you a fresh revelation of who you are, and read the promises found in the Word of God.