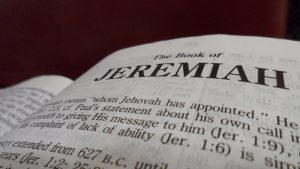 In Jeremiah 1:9, we read that God touched Jeremiah’s mouth and gave him the message, God summarizes the message in verse 10. Notice the first words, “today I appoint you”. God gave Jeremiah authority over nations and kingdoms by the power of the word of God.

Jeremiah’s message was to be one of both judgment and blessing. The uprooting and tearing down was the coming judgment, but the metaphor of planting and building was a sign of God’s blessing to come after the judgment.

Then God gives Jeremiah 2 visions.  The first is a vision of an almond branch.  The Hebrew word for Almond tree sounds very similar to the word for watching. The symbolism of the Almond tree is that it is watchful, God is not slow in responding in judgment, the time is coming sooner than expected, and in verse 12 God confirms this vision and explains that He is watching the nation of Judah. The theme of God watching his people flows through the book of Jeremiah. This message to humanity is still the same today: God is watching! He will watch over the fulfilment of His word. When sin and immorality engulf nations and even penetrate the Church, we should remember, God is watching!

The second vision is of a boiling pot, shows that the message would be one of judgment at the hands of a people from the north. Ultimately this was the armies of Nebuchadnezzar of Babylon coming to lay siege to Jerusalem. 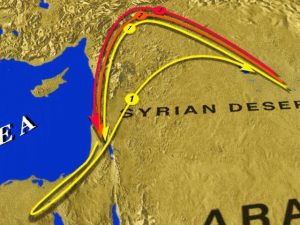 The sin for which the people would be judged was the fundamental one of breaking the covenant with the Lord, by the rejection of him in favor of other gods (as we see in v16), and it continued to be a constant theme in the book.

God put His words into the prophet’s mouth and those words were effective to accomplish His will. God not only gave Jeremiah His words, but He also promised to “watch over” those words until they were fulfilled (Jer. 1:12).

Prophecy is not necessarily foretelling the future, rather it is to declare the words of God, to declare the truth, in that sense, the act of preaching the word of God is an act of prophecy.

Just like it was in Jeremiah’s day, so it is now, that the declaration of the word of God was not well received.

There were prophets in Jerusalem during Jeremiah’s time, those who spoke only words of blessing and wellbeing to the people. These prophets were well liked and had an adoring following, and the Kings who rejected God’s law loved to hear from these prophets.

Today as preachers, we have the same challenge.  Paul the apostle knew this and wrote the following in his second letter to Timothy in 2 Timothy 4:3. Today, there are false teachers, those who twist the word of God for their own benefit. Stretching individual verses out of context with the primary goal of deceiving their hearers into parting with their money. If you don’t know the Word of God, you too will be deceived in these days as Jesus said in Matthew 24:11. We need to pray for wisdom and discernment as we read the word of God in order to stand firm in the calling that God has on our lives.

In verse 17, God speaks to Jeremiah and tells him to get ready, to brace himself for the challenge that lay ahead.

When Jesus sent out the disciples in Matthew 10, he issued a similar warning (read Matthew 10:16-20).

Both Jeremiah and the disciples were told that they were going to speak the very words of God, they didn’t have to figure out what would be the best thing to say, they could simply stand firm on the words of God. And this is the key, standing on the authority of the word of God. The church needs to be the prophetic voice in our culture. Not simply a voice known for what we oppose, but a voice that declares the truth in love and offers alternatives that bring life. What does the Bible have to say about the issues that we wrestle with in our culture, issues such as racism, broken homes, homosexuality, money, abortion and homelessness to name just a few.

Take the abortion debate as an example, the fact that there is any debate whatsoever is a sign of how far we have slipped as a culture, the Bible is clear that we are created in the image of God and it is wrong to take another human life, but as the church, the prophetic voice in our culture, what alternatives are we offering? Are we offering to take the children and raise them up?

We live in an age where Bible is regarded as offensive, but the word of God supersedes culture, the Bible transcends seasons, Isaiah 40:8 says, “The grass withers, the flower fades, but the word of our God will stand forever.”

God continues in verse 17 to say to Jeremiah, “do not be terrified by them, or I will terrify you before them.”

God knew Jeremiah and God knows us too, He knows that our natural inclination is to be afraid of what others might be thinking. But the fear of God is the best antidote against the fear of man. Let us always be afraid of offending God first (see Proverbs 1:7). Remember you and God are a majority, even if everyone else opposes you, as they opposed Jeremiah, as you follow God’s leading in your life, you are in the majority.

But in order to be the prophetic voice in our culture, we need to know the word of God. There is no substitute for living the Christian life in our culture, other than to spend time daily reading the Word of God, allowing God to speak to you.