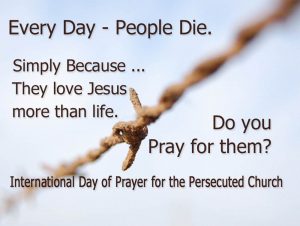 In his book, “The Global War on Christians”, John Allen calls the worldwide persecution of Christians, “the most dramatic religion story of the early twenty-first century, yet one that most people in the West have little idea is even happening.”

John 15:18-25 is a passage that does not preach well in our western “Prosperity Gospel” mindset, where our culture, upbringing and education all teach us that we have rights.  It is expected that Christians are respected members of society and by living out our Christian values and principles people will give us honor. But this is so far from the reality of what Jesus taught.

However, persecution is right on our doorstep, Jesus taught that this world is not our home (see John 15:19), and Jesus continues in verse 20 to say that a servant is no greater than his master, this is the normal Christian life. We have recently completed the series on the normal Christian life, noting that the foundation for the normal Christian life is applying the cross of Jesus Christ to our lives, daily dying to ourselves, being willing to lay aside our preferences, our rights and our desires for the sake of the Gospel.

It is almost predictable that when I teach in any setting on dying to our rights, people get angry. It just proves how conditioned we are to expect that this Christian life is a life of leisure and prosperity and peace. Jesus taught the opposite and he was persecuted more than any other man in history. In 1 John 3:13 we read, “Do not be surprised, brothers and sisters, if the world hates you.”  This is the normal Christian life.

For millions of Christians around the world, persecution is their daily reality. From intimidation to isolation, beatings, imprisonment and even death, they live with the ongoing threat of persecution, and yet they choose to faithfully follow Jesus.

Faithfully being a follower of Jesus is the cause of persecution. Remember we saw that the life of the Christian is not found in simply becoming a better person, but rather we are “in Christ”. Being in Christ is the reason for and the target of persecution in our world.

In Romans 8:17, the apostle Paul tells us, “Now if we are children, then we are heirs – heirs of God and co-heirs with Christ, if indeed we share in His sufferings in order that we may also share in His glory.” So, when we share in Jesus’ sufferings we become heirs who will also share in his glory. Suffering is part of it the process that leads to us sharing in the glory of our resurrected Lord.

Persecution isn’t something we think about often, but it is incredibly real for believers all over the globe. The Pew Research Center estimates that 75% of the world’s population lives in regions with severe religious restrictions—with many of those being Christians. And according to the United States Department of State, Christians face persecution from their neighbors or government in as many as 60 different countries, simply because they claim Jesus as Lord.

Todd Johnson of Gordon-Conwell Theological Seminary documents that one hundred thousand Christians, eleven per hour, have been killed on average every year of the past decade. And it is estimated that more Christians died for their faith in the last century than in the previous nineteen centuries combined. Unfortunately, many Christians today, operate under the assumption that persecution is a part of the Church’s past.

Jesus told His followers to expect persecution, John 15:20 reads,“…If they persecuted me, they will persecute you also.” So this is expected but what is our response to be? How are we to respond as we sit here in comfort and ease without the threat of violence for our belief in Jesus.

It’s easy to hear about Christian persecution and feel afraid, but God did not give us a spirit of fear (2 Timothy 1:7).

It’s also natural to want to put an end to the suffering of persecuted Christians. But the persecuted Church isn’t asking for an end to their hardships, for them, persecution is normal. In fact, many of our Christian brothers and sisters who are being persecuted are praying for you and I, that we would remain strong in the face of an increasingly godless society. Instead, they pray for the strength to withstand persecution. These hardships produce believers with genuine faith, who truly understand the cost involved in being “In Christ”, and they ask for our prayers for strength to withstand.

Christian persecution is overwhelming, and we can all too easily become desensitized by the statistics.

But I want to challenge you to spend some time today praying on your own or as a family for the persecuted church. Let us pray with them rather than for them, that the word of God will move swiftly across the whole earth.

“The blood of the martyrs is the seed of the church.”