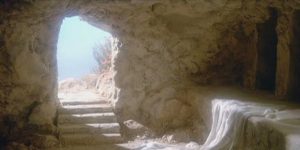 He is Risen – the Hope of the resurrection

There are some still who claim that Jesus never died, he was simply in a coma and revived himself in the tomb, however there is indisputable evidence that Jesus was dead, and he was raised to life by the power of God (Romans 8:11). The greatest miracle in all of history is not simply when Jesus rose from the dead by the power of God, but that he defeated death and destroyed the works of Satan.

In Luke 24, we read about the resurrection, and we see three things that Jesus left behind when he came out of the tomb.

In Luke 24:5 the angels, these two men in dazzling apparel, stood next to the women and said, “why do you seek the living amongst the dead”. This is still the question that needs to be asked of mankind today. At some point everyone begins to question the purpose and the goal of it all, why are we here? Is there life after death? And if there is a heaven, how do I get to go there? Without the secure knowledge of the resurrected Jesus, people are striving and trying to extend their lives or find meaning and purpose in life.

People try to find alternative ways of salvation, from trying to live a good life to earn favor from God. People try religion, traditions, even giving money to the church or other good works, all of these will not save you, all this is looking for the living among the dead.

There is no other way of salvation than through faith in Jesus Christ (Acts 4:12). The truth is that there is no other God, who sent his only son, to take on human form, to suffer and die to take our place to offer us salvation as a free gift. There is no other religion that can claim that truth. We celebrate today because of the empty tomb, without it we would be following a hollow religion. Rather we are invited into a relationship with the creator of the universe, we aren’t looking for the living among the dead.

As Christians we are freed from the grave, Jesus paid the price so that you could be free from your past life. As a follower of Jesus, we must never look back, don’t go back to the grave of alcohol addiction, drug addiction, gambling, pornography, gossip, slander and the likes, all these are graves that lead to death. Jesus died that you would be free from the grave, why would we go back and wallow in sin? Jesus left the tomb behind, he didn’t look back and neither should we. He walked away because he was done with death, death had been defeated. When you have been made new in Christ, you have a new life, how can you look back?

Job wrote these words hundreds of years before Jesus walked the earth, but God gave him a prophetic glimpse into the resurrection and the second coming of Jesus. He was so thrilled that he couldn’t contain his joy. I pray that in this season, you would have a glimpse of the risen Lord Jesus.

For I know that my Redeemer lives,
and at the last he will stand upon the earth.

And after my skin has been thus destroyed,
yet in my flesh I shall see God,
whom I shall see for myself,
and my eyes shall behold, and not another.
My heart faints within me!